Victims of property crimes are becoming frustrated with a lack of follow-up from an already understaffed department.

TACOMA, Wash. - In a new initiative, Tacoma Police say they are investing money and resources toward targeting property crimes in the city.

Tacoma Police officials told FOX 13 News the reason for the focus on these crimes comes from the community.

Leadership teams, made up of the chief of police and other high-ranking officers, spoke with businesses during public forums. Officials with Tacoma Police say this is where they realized a change was needed.

Since Nov. 4, three detectives have worked volunteer overtime hours to focus on property crimes that were previously unassigned.

In total, those three detectives are working on about 45 property crime cases.

However, some recent property crime victims have doubts about this new effort.

"It’s not enough at all. It’s not even close," said Gabe. Along with his wife, Jenn, Gabe had been victimized in a brazen crime.

Jenn told FOX 13 News that a group of men jumped out of a vehicle and stole her car while she was trying to get to work.

The family did not want to use their last name.

Pierce County seeing a 'massive increase' in crime in 2022

This year so far, Pierce County Sheriff’s deputies say there has been a massive increase in the number of non-residential burglaries, armed robberies, aggravated assaults, rape, theft, motor vehicle thefts and prowls—compared to the last 5 years of data

Gabe tells us since the crime in November, they have gotten their car back. However, the family did it on their own-- without the help of Tacoma Police.

Gabe says TPD has not provided much help during the last month.

"I don’t even see why we have the police, honestly. That’s where I’m at right now. It’s been a whole month and not even a call back," he said.

Tacoma Police officials tell us there is no set dollar limit for how much overtime officers are able to work, and it’s possible more detectives can get involved.

They also say these overtime hours do not pull from other resources, specifically officers working beat patrol.

Recent Tacoma crime numbers show property crime is up in the city for the entire year. However, over the last month, the total number of property crimes has dipped.

But other areas of property crime like stolen property, stolen cars, and arson are still up. 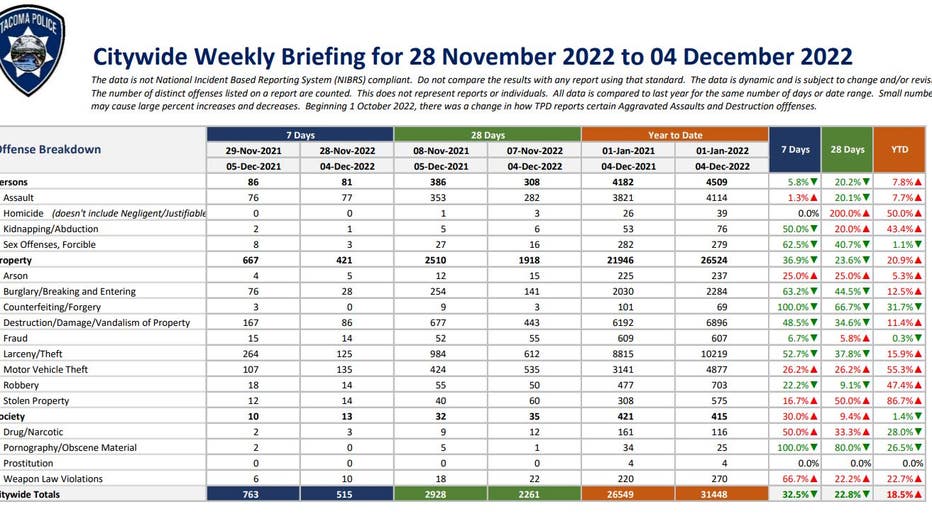