Street racing and illegal car meet-ups are taking over Tacoma streets, and city leaders are considering going after spectators in an effort to crack down on the rising crime numbers.

TACOMA, Wash. - Street racing and illegal car meet-ups are taking over Tacoma streets, and city leaders are considering going after spectators in an effort to crackdown on the rising crime numbers. 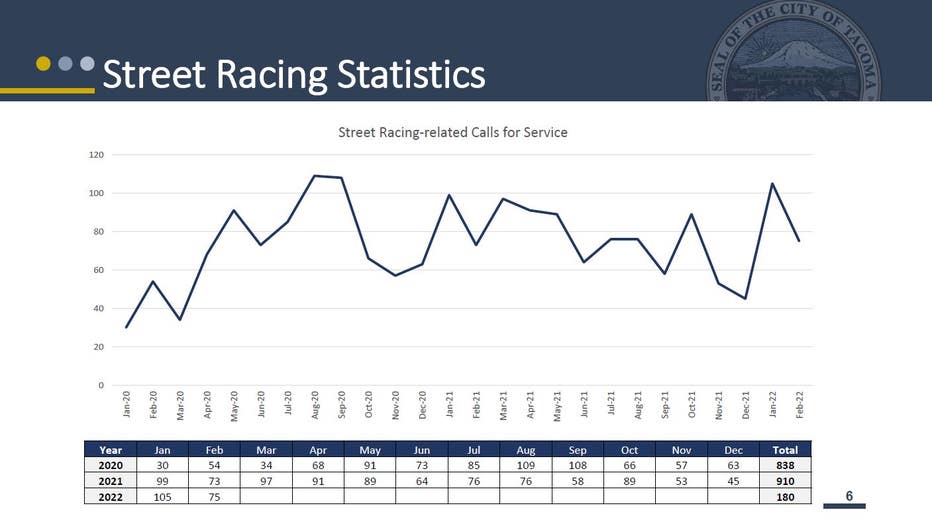 "It’s just really a shame to see our streets go to such low, lows, and nothing is done about it," said Max Rinehart.

Rinehart lives in Tacoma near South 48th Street and Pacific Avenue. This intersection has been a recent target for street racing, and illegal car meet-ups.

Rinehart says he was woken up to the sounds of dozens of people blocking the intersection near his home, doing burnouts and donuts. Unfortunately, that’s not the only thing happening.

"We hear gunfire, and nothing happens. They speed off, and that’s it," he said.

Tacoma neighbors fed up after night of chaotic street racing

Street racers descended on Tacoma over the weekend causing mayhem and havoc for the people who live in the city, and it was caught on-camera.

Tacoma police talked about the challenges they face addressing the issue with city council on Tuesday.

Police say they are facing hostile crowds and not wanting to make the situation worse, like what happened back in January 2021.

Police will also not pursue for street racing-related crimes if a suspect takes off.

Tacoma Police also say the city is facing an increase in violent crimes, which takes priority and takes away resources from other areas, like the ability to respond to street racing.

On Tuesday, Tacoma lawmakers discussed several options for addressing the issues, including arresting spectators at these illegal car meet-ups and street racing events.

Spectators are defined as anyone at one of these events, who knew about it, encouraged it, or is affiliated with it.

Anyone arrested could face penalties like jail time or fines.

In the last year, Tacoma Police say they have charged four people with street racing-related crimes.