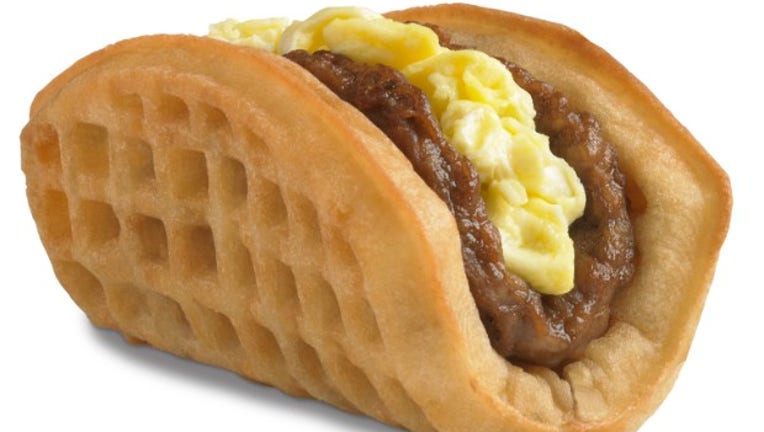 Taco Bell is moving in on the morning market, angling to compete with fast-food rivals such as McDonald’s by launching a breakfast menu nationally on March 27.


The menu -- which the Irvine company said is its most extensive in more than 50 years -- includes items such as a waffle taco, the A.M. Crunchwrap and breakfast burritos.

The options will be available from 7 a.m. or earlier until 11 a.m. at more than 5,500 restaurants, according to the restaurant chain.

Yum Brands' stock, which has been volatile in the past year, was trading up 41 cents to $73.26 a share late in the trading day.

Executives at Taco Bell, which began testing its morning menu two years ago, acknowledge that the breakfast sandwich field is a crowded one.

McDonald’s is a major player, though the Oak Brook, Ill., company demurred from addressing reports Monday that it may be headed toward longer breakfast serving times.

“We are always exploring new ways to serve our customers, but there are no tests currently in place for extended breakfast hours,” said McDonald’s spokeswoman Lisa McComb.

Breakfast sales at limited service restaurants reached $31.7 billion in 2012, expanding 4.8% a year since 2007 and outpacing growth in any other food-service segment, according to research firm Technomic.

Taco Bell is investing in its “most extensive training ever” to pull off the nationwide breakfast launch, according to a statement from company President Brian Niccol. He called the effort “one of the brand’s priority initiatives of the year” along with plans to double revenue and add 2,000 restaurants by 2022.

The chain has pushed in recent years to endear itself to 18-to-34-year-old consumers. The company ditched its kids meal program last year and is promoting its FourthMeal menu, which targets night owls. Its Doritos Locos Tacos are considered to be the most successful product launch in Taco Bell history.