SHELTON, Wash. -- A suspect who lived on the property of Wednesday night's industrial fire in Shelton has been arrested, the Mason County Sheriff's Office announced Thursday.

Mason County Fire spokesman Bob Burbridge said investigators were still looking over the scene of the fire Thursday. He said one man was taken to Mason County General Hospital after he tried to keep people out of the building and a "melee" ensued with a pit bull.

Burbridge also said that the state Department of Ecology told him that no pollutants were found in the area of the fire.

Just after 7 p.m. Wednesday, firefighters  found an RV fully engulfed in flames. However, the wind whipped up the flames and it spread to the nearby body shop, which contained tires and other items, authorities said.

They immediately called out a three-alarm fire. Nine fire agencies and 60 firefighters responded to the scene.

As heavy, black and possibly toxic smoke rose into the air, authorities told residents within a half-mile of the fire to remain indoors with windows closed and air conditioners turned off, and advised those with breathing problems to evacuate the area.

Apparently there were some expensive items in the shop, including a Shelby GT, authorities told a Q13 News photojournalist at the scene. 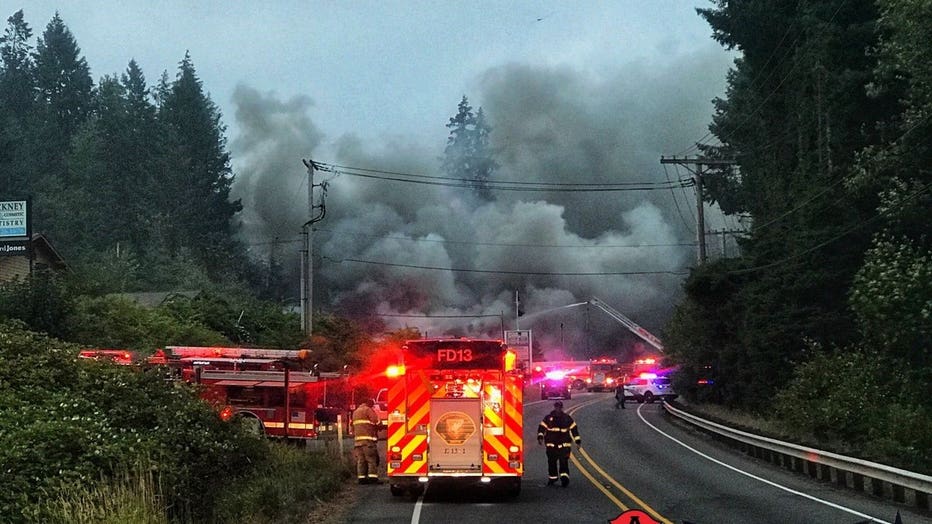