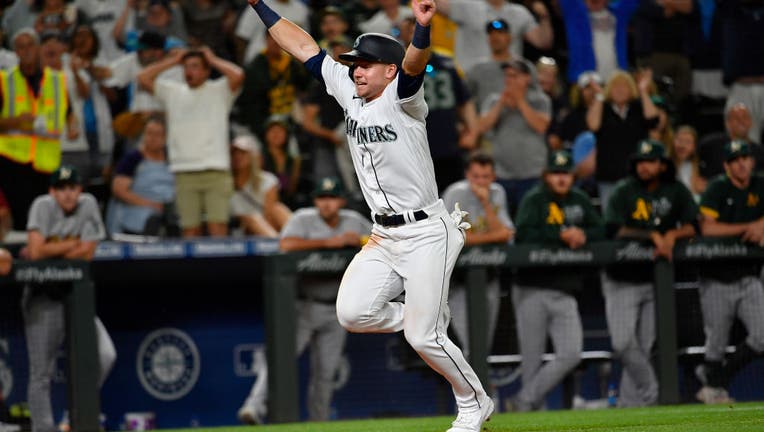 SEATTLE, WASHINGTON - JULY 24: Jarred Kelenic #10 of the Seattle Mariners scores on a Lou Trivino #62 of the Oakland Athletics wild pitch in the ninth inning of the game at T-Mobile Park on July 24, 2021 in Seattle, Washington. The Seattle Mariners w

The Seattle Mariners have worked their way into the postseason race — one run at a time.

The Mariners improved to 23-8 in one-run games, and that remarkable record has them just 1 1/2 games behind Oakland for the second wild card in the American League. Seattle has been outscored by 52 runs on the season, but the Mariners are eight games over .500.

This last series against the Athletics was a microcosm of Seattle’s season. The Mariners lost 4-1 in the opener before taking three straight one-run games.

Although there are still reasons to doubt that Seattle will be in the playoffs in the end, there is understandable excitement surrounding this team. The Mariners haven’t made the postseason since 2001 — the longest drought in baseball. The Miami Marlins ended what was the second-longest absence during last year’s shortened season. They qualified for the first time since 2003

Seattle is seven games behind first-place Houston, and the Mariners have a chance to cut into that gap during a three-game series against the Astros starting Monday night. Seattle also trails Tampa Bay, the top wild card at the moment, by six. So the most likely postseason scenario for the Mariners right now would be playing on the road in the wild-card game.

Still, it’s hard to see Seattle doing anything but pushing forward at the trade deadline later this week. The Mariners have come a long way already.

For other teams, the outlook isn’t particularly rosy heading into the deadline. Washington was swept in a three-game series at last-place Baltimore, and the Nationals are now eight games out of first place and 11 back of a wild card. Stephen Strasburg’s health is still a problem, and while the Nationals still have a young star they can build around in Juan Soto, Max Scherzer’s name has come up in trade speculation.

Cleveland is nine games out of first place in the AL Central and five behind the second wild card. The Indians have been without Shane Bieber for over a month, and it doesn’t appear that he’ll be back any time soon.

The first time the Mariners won the AL West — in 1995 — they beat the New York Yankees in an 11-inning thriller to win the AL Division Series. Although the most famous play from that game was Edgar Martinez’s winning hit — and Ken Griffey Jr.’s dash to the plate — another well-known player made his postseason debut and scored the tying run as a pinch-runner in the eighth. Who was it?

LINE OF THE WEEK

Marcus Stroman allowed one hit in eight innings to lead the New York Mets to a 7-0 win over Cincinnati on Wednesday.

COMEBACK OF THE WEEK

There were plenty of good candidates for this slot this past week, but the Chicago Cubs take first prize with their six-run ninth inning in a 7-6 victory over St. Louis on Tuesday night. The Cubs had a win probability of 0.4% in the eighth inning, according to Baseball Savant.

The Kansas City Royals honored former outfield standout Alex Gordon, and he offered a fun take on the ceremonial first pitch when he delivered it from left field, throwing a one-hopper to catcher Salvador Perez.

Alex Rodriguez scored the tying run on a bases-loaded walk in his first postseason appearance. Immediately after that, a little-known reliever named Mariano Rivera came on and calmly struck out Mike Blowers on three pitches to end the inning and keep the game tied.