SHORELINE -- Neighbors call the house at the end of North 169th Street a nuisance property, and they say that is putting it mildly. 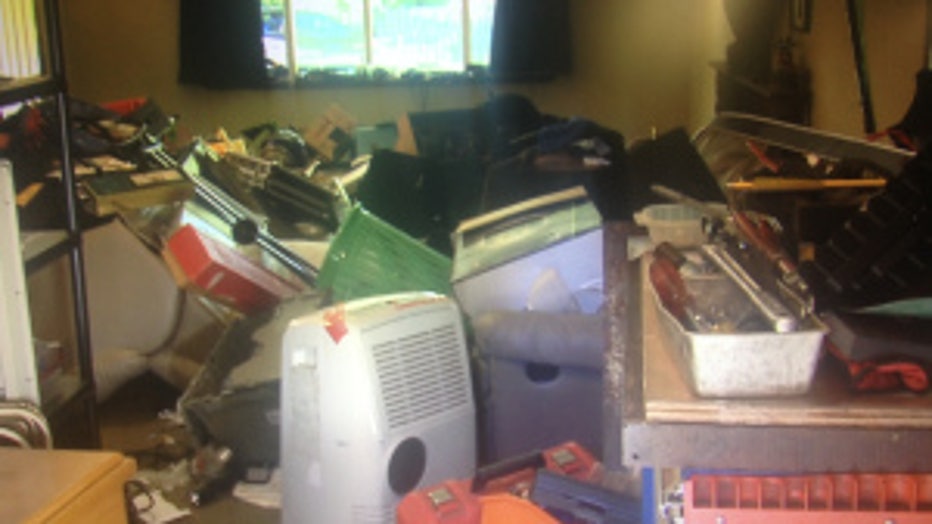 After numerous complaints from neighbors and a lengthy undercover investigation, Shoreline police, King County deputies and a SWAT team served a narcotics warrant on the house Thursday morning, but when they got inside, what they saw made them back out and get a second warrant for stolen property.

"We recovered narcotics, as far as heroin, meth, and recovered firearms and floor-to-ceiling property, most of it we suspect is stolen. We got stolen laptops, musical equipment, lot of tools, we found the name of a school on some musical instruments so there may have been a burglary there," King County sheriff’s spokeswoman Katie Larson said.

Investigators also found a handgun, a shotgun and a suspected pipe bomb.

Neighbors were not surprised.

Late Thursday afternoon, the homeowners arrived to reclaim their house from what they call troublesome tenants.

"We came here quite a few times trying to collect rent and no one would open the door or nothing.  We'd see people kind of look through the windows when we'd knock and we knew something was up,” homeowner Jack Cook said

Cook says he was in the process of evicting his renters, then he allowed us to follow him for a look inside the home.

There was motorcycle engine sitting in the living room, junk stacked to the ceiling in the bedroom and a bag of hypodermic needles in the hallway.

Now the house has since been boarded up and for neighbors here a big problem has been solved.

"Tactical team went in did a super job, got everybody out and took everybody away so the bad guys are all gone now,” Houston said.