People preparing for the 4th of July holiday are reminded to take precautions to help prevent the spread of coronavirus.

SPOKANE, Wash. - Cirio Hernandez Hernandez was thinning apple trees on a June morning in Yakima, grabbing a fistful of tiny apples and knocking off all but one that was left to grow to a marketable size.

It wasn’t the Yakima Valley’s hot temperatures, or the strenuous work, that was causing him discomfort.

“The hardest part is the mask,″ Hernandez Hernandez said, because it heats up his face.

But he and his fellow workers in the apple orchard were at least wearing face coverings, the primary protection against the coronavirus, which has surged in eastern Washington state. 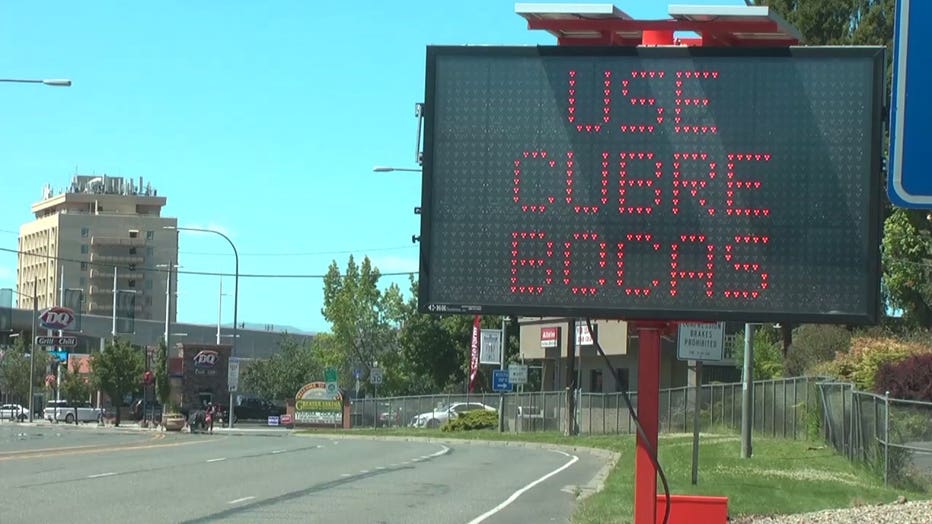 While the coronavirus at first pounded the greater Seattle area, the epicenter has now moved east across the Cascade Range thanks to exploding case loads in June. Washington is seeing rising cases of COVID-19, driven in large part by increasing numbers in Yakima, Benton, Franklin and Spokane counties, the largest communities in eastern Washington.

It’s no coincidence that Gov. Jay Inslee has visited Yakima, Spokane and the Tri-Cities of Richland, Kennewick and Pasco in the past two weeks to urge citizens to take greater precautions.

The numbers are stark. In the past week, more than 40% of the state’s 2,957 newly confirmed cases of coronavirus occurred within those three metro areas, which make up less than 15% of the state’s population, according to the state Department of Health.

Yakima County, with 250,000 residents, has nearly as many cases as the neighboring state of Oregon, which has more than 4 million residents.

As of Thursday, Yakima County had recorded 7,270 cases and 159 deaths, according to the state Department of Health. Oregon has seen around 9,000 cases.

Yakima County’s surge of cases is partly driven by the large number of so-called essential workers in the county’s giant farm and food-production industries, officials have said. Those employees cannot work from home.

Benton and Franklin counties, which constitute the Tri-Cities metropolitan area of 300,000 people, also have big farm and food processing industries. The Tri-Cities have had 3,608 cases, including a record 215 on Wednesday, with 115 deaths.

Franklin (45) and Yakima (35.6) counties have the second and third highest rates of newly confirmed daily cases per 100,000 residents among metropolitan areas on the West Coast, the Harvard Global Health Institute reported this week. They trail only Imperial County in California.

The number of cases in the Tri-Cities includes some 220 staff and inmates at the Coyote Ridge Corrections Center, the largest prison outbreak in the state.

Yakima and the Tri-Cities were the only communities in the state still in Phase I of Inslee’s gradual reopening process from virus restrictions, which meant they were mostly in lockdown. However on Friday authorities announced that Benton, Franklin and Yakima counties had been approved to move to a modified Phase 1. That allows more activity, like some outdoor seating at restaurants and limited in-store retail business.

Spokane County, which has 520,000 residents, is in Stage II with many businesses open. But the county has seen its once-low case numbers spike, in large part because people are going out more and because many residents are declining to wear masks.

RELATED: Inslee: Yakima County must do more to prevent coronavirus

Spokane County on Thursday reported a total of 1,443 cases and 41 deaths during the pandemic.

On Tuesday, Spokane County reported 81 new cases over a 24-hour period, its highest number since the outbreak began.

“I go into July Fourth with some trepidation given that our numbers have exploded since Memorial Day,″ Dr. Bob Lutz, county health director, said Monday. Spokane had just 450 cases on Memorial Day.

“Spokane is on the verge of a very dire situation because of this pandemic,″ Inslee said.

The Democratic governor has emphasized wearing masks during his visits to the three communities.

“We have the capability to beat it like the Gonzaga Bulldogs beat almost every team they play,″ Inslee said in Spokane, referring to the local basketball powerhouse. “Wear masks.″

Health experts contend that 80% of the population must wear masks to prevent the spread of COVID-19 in public spaces. But many communities don’t appear to be reaching that level.

In Yakima County, which Inslee has called the new epicenter of the disease, surveys have found mask wearing has climbed from about 35% of people in public to about 65% in recent weeks, Lofy said.

Local 4th of July celebrations take on creative concepts this year due to the COVID-19 pandemic canceling many events. One local favorite, the fireworks at Cheney Stadium, will be offered virtually this year.

The political divide over masks, with many conservatives taking a cue from President Donald Trump and declining to wear them, makes for uneven adherence to the mask-wearing order.

Many people in liberal Seattle wear masks, but many residents of more conservative eastern Washington do not.

Inslee recently ordered that all residents of the state must wear masks when out in public, or face penalties. It was not well received by everyone.

“I can’t wear a mask because I’m a patriot,”″ said Janice Tollett of suburban Airway Heights, who showed up at Inslee’s Spokane meeting to protest the mask order.

“The First Amendment right is why I don’t wear a mask,″ Tollett said. “I just want our country back.″

In the Tri-Cities, Inslee was heckled off the podium Tuesday by protesters who yelled “you can’t face the truth″ and “Lies, lies.″

“It is surprising to me that people are yelling about that still,″ Inslee said later of the mask opponents. “We need to pull together.″

The protesters were apparently unswayed by local public service announcements filmed by former U.S. Secretary of Defense James Mattis, who grew up in the Tri-Cities. “Make sure we’re wearing the face masks and we keep the social distancing,” Mattis says in the announcements.

The state Department of Health noted that Hispanic residents have been particularly hard-hit by the virus. While Hispanics are 13% of the state population, they make up 58% of COVID-19 cases since May in which race and ethnicity is known, the agency said.

Hispanics make up a large portion of the population in Yakima and the Tri-Cities.

“Hispanic people may be at higher risk of infections for several reasons, including living in larger households, limited access to healthcare and working in essential services,″ the agency said.