WASHINGTON - The Supreme Court is temporarily blocking an order that would lift pandemic-era restrictions on asylum seekers but the brief order leaves open the prospect that the restrictions in place since the coronavirus pandemic began and have been used to turn back hundreds of thousands of prospective asylum seekers could still expire on Wednesday.

The court's decision comes as officials and aid groups along the border are trying to prepare for whatever changes may or may not come Wednesday.

In the city of El Paso, Mayor Oscar Leeser said they've received information from Border Patrol and shelters just across the border in Mexico indicating that up to 20,000 migrants might be waiting to cross into El Paso. The Red Cross has brought 10,000 cots to help with the increase, he said.

The order Monday by Chief Justice John Roberts — who handles emergency matters that come from federal courts in the nation’s capital — comes as conservative states are pushing to keep the limits on asylum seekers that were put in place to stem the spread of COVID-19. The states appealed to the U.S. Supreme Court in a last-ditch effort before the restrictions are set to expire Wednesday, saying that lifting the limits on asylum seekers would cause irreparable harm to their states. 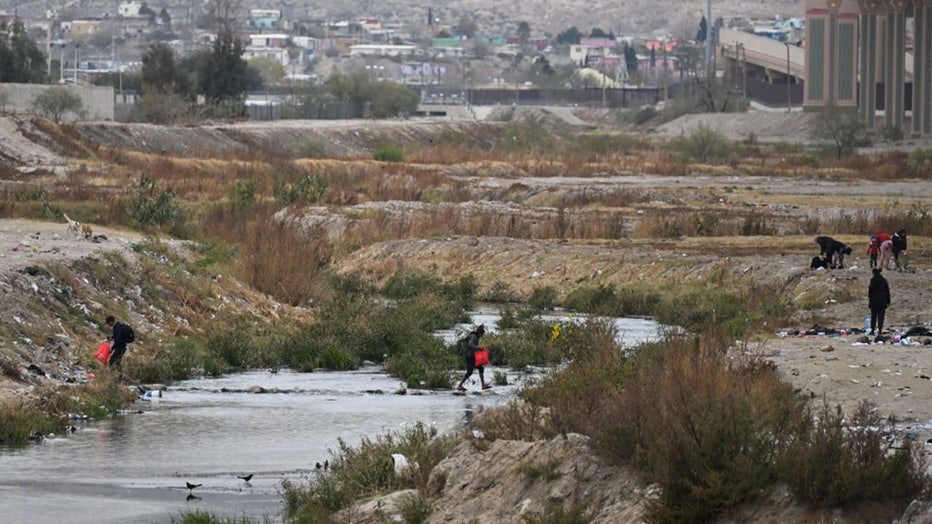 FILE - Migrants walk along the United States side of the Rio Grande river after crossing the border from Mexico into El Paso, Texas, as seen from Ciudad Juarez, Chihuahua state, Mexico on Dec. 18, 2022. (PATRICK T. FALLON/AFP via Getty Images)

In the one-page order, Roberts granted a stay pending further order and asked the government to respond by 5 p.m. Tuesday. That is just hours before the restrictions are slated to expire on Wednesday.

The order by Roberts means the high-profile case that has drawn intense scrutiny at a time that the Republicans are set to take control of the House and make immigration a key issue will go down to the wire.

The immigration restrictions, often referred to as Title 42, were put in place under then-President Donald Trump in March 2020 and have prevented hundreds of thousands of migrants from seeking asylum in the U.S. in recent years. But as they’re set to expire, thousands more migrants are packed in shelters on Mexico’s border with the U.S.

Conservative-leaning states have argued that lifting Title 42 will lead to a surge of migrants into their states and take a toll on government services like health care or law enforcement. They also charge that the federal government has no plan to deal with an increase in migrants.

"This Court’s review is warranted given the enormous national importance of this case. It is not reasonably contestable that the failure to grant a stay will cause an unprecedented calamity at the southern border," the states wrote in their request Monday.

Immigration advocates have said that the use of Title 42 goes against American and international obligations to people fleeing to the U.S. to escape persecution. And they’ve argued that things like vaccines and treatments for the coronavirus have made the policy outdated. They sued to end the use of Title 42; a federal judge in November sided with them and set the December 21 deadline.

Immigration advocates weighed in on Roberts' order. In a statement, Krish O’Mara Vignarajah, the President and CEO of Lutheran Immigration and Refugee Service, called the decision "deeply regrettable."

"The Biden administration must make a full-throated defense of our humanitarian obligations in the face of politically motivated litigation. Title 42 has never been grounded in any public health rationale," Vignarajah said in a statement late Monday. "Title 42 has only driven up repeat attempts to cross the border and lined the pockets of cartel smugglers who prey on vulnerable asylum seekers."

In a statement late Monday the Department of Homeland Security, which is responsible for enforcing border security, said as Title 42 is still in effect people who try to enter the U.S. "unlawfully" will be expelled to Mexico.

Impact of Title 42 ending next week

With the ending of Title 42 set for Dec. 21, 2022, many people are concerned about the impact for communities along the border and across the country. LiveNOW from FOX's Josh Breslow talks with the new Director of American University's Center for Latin American & Latino studies about this.

"While this stage of the litigation proceeds, we will continue our preparations to manage the border in a safe, orderly, and humane way when the Title 42 public health order lifts," the statement read.

In the leadup to the end of Title 42, administration officials said they have surged more resources to the southern border, including more border patrol processing coordinators, more surveillance and increased security at ports of entry. About 23,000 agents are currently deployed to the southern border, according to the White House.

Before the Supreme Court weighed in, White House officials stressed Monday that the administration was bound by a court order to lift the pandemic-era border policy, despite urging from Republicans and some Democrats in Congress to extend it.

"The removal of Title 42 does not mean the border is open," White House press secretary Karine Jean-Pierre said.

Jean-Pierre said the administration has "additional robust planning underway" and pushed Congress to approve $3.5 billion in more funding for DHS as lawmakers continue to haggle over details for a massive year-end spending bill.

That money for DHS would expand transportation capabilities so migrants can either be moved to less crowded border facilities, or be quickly removed if they have no legal grounds to stay. It would also fund more holding facilities, help speed up the processing of asylum claims and hire 300 more additional border patrol agents.

In the border communities, officials and aid groups have been preparing for the end of Title 42 as well and doing so at a time when temperatures are expected to drop as an Arctic blast sweeps south.

The top elected official in Hidalgo County, Judge Richard Cortez, said in the Texas border community of McAllen Border Patrol agents have been meeting with city and county officials, including in Mexico, to prepare for an influx of migrants crossing the border once the Title 42 policy ends. He's concerned about where migrants will be able to sleep or get a warm meal and making sure the bridge connecting the U.S. and Mexico remains open to commercial traffic.