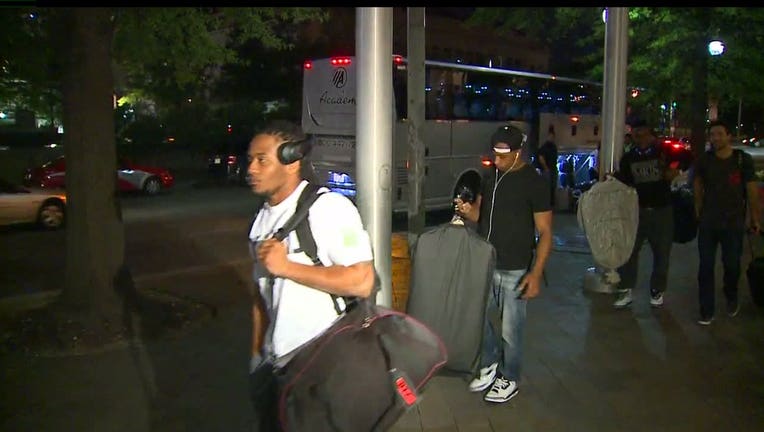 Seattle Seahawks arriving at the team hotel in Washington, D.C., Tuesday night in preparation for their visit to the White House Wednesday to be honored for their Super Bowl victory by President Barack Obama. (Photo: KCPQ-TV)

WASHINGTON -- A "really excited" Seahawks team arrived Tuesday night in Washington, where President Obama plans to honor the team at the White House Wednesday for their Super Bowl XLVIII victory.

"We are off to the @White House!" coach Pete Carroll tweeted earlier Tuesday afternoon. "Everyone is really excited! We are very proud to represent the #12s in DC! #GoHawks"

"I think I'm going to be speechless in that moment," Doug Baldwin Jr. said upon arriving in D.C.

"We reiterated it on the plane ride over here," Baldwin said. "We're truly blessed to be here in this moment."

But then he joked, "To be honest, I'm gonna try to steal a napkin or something with the White House logo on it."

Russell Okung said, "The whole feeling and experience itself is really surreal -- it's just a privilege."

Okung said he will try to take a "selfie" with the president. "If I can," he added. "I don't want to make any sudden movements."

Quarterback Russell Wilson said in an interview, "It will be an honor. Obviously, President Obama, a great guy. And just for us, to win the Super Bowl ... just to be with everybody, bring everyone as one unit, it will be pretty amazing."

"On the way to the White House!" Earl Thomas tweeted. "I really be in my own zone."

Q13 FOX News Sports Director Aaron Levine is traveling with the team and will have insider access throughout the trip and White House event.

The visit continues the White House tradition of honoring sports teams.  Calvin Coolidge was the first president to invite a team to the White House (the 1924 Washington Senators), and George

W. Bush invited sports champions of all sorts to the White House -- a practice Obama has continued.

And haircuts apparently were in order for some of the players...

FOR PREVIOUS VIDEOS ABOUT CELEBRATION, GAME, SEE BELOW:

Video of Seahawks, Pete Carroll the day after winning the Super Bowl