Early Wednesday morning record breaking solar flares erupted shooting radiation across space to Earth. That radiation will mainly show in the form of Northern Lights in the next couple of days.

According to NASA, the second flare was the most powerful flare recorded since 2008 when record keeping on the sun began.

This animation shows both the X2.2 and the X9.3 flares that the Sun emitted on Sept. 6, 2017. The imagery was captured by NASA's Solar Dynamics Observatory and shows light in the 131 angstrom wavelength.(Credits: NASA/Goddard/SDO)

Solar flares are powerful bursts of radiation that don't harm us because we are protected by Earth's atmosphere but they can disrupt GPS and communications signals.

Any possible disruptions from these flares passed with minimal disruption to the public.

This is the second solar flare event this week.

The sun emitted a mid-level solar flare on September 4, 2017, triggering a Strong Magnetic Storm Watch for the nights of September 6 and September 7. 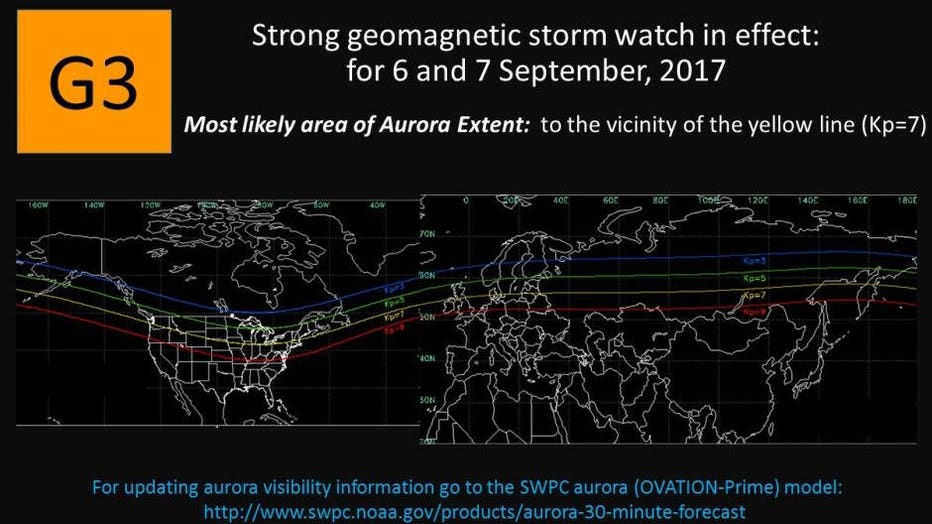 Northern lights are typically visible as far south as a kP value of 7.

Using the above map, that means northern lights may be visible in the entire state of Washington, Montana, and even Wisconsin and Michigan in the Midwest.

Unfortunately, smoke blanketing much of the U.S. West will block out any cool light display.

Magnetized particles did erupt in the wake of Wednesday's solar flares, but NASA is still trying to analyze whether or not Earth is in its path.