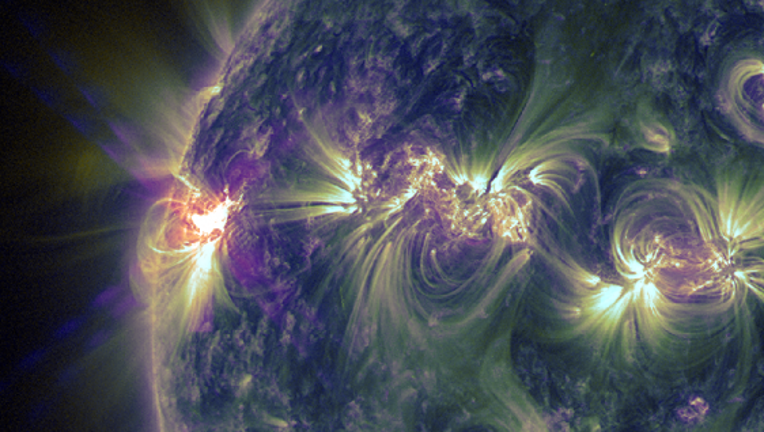 There she goes again!


The same region of the sun that brought you three powerful solar flares in a 24-hour span from Sunday night to Monday evening let loose Tuesday night with another explosive flash of ultraviolet radiation and sent tons of its own solar material flying through space.

The flare, which peaked at 6:48 p.m. EDT, was the fourth this week to be categorized as X-class, the most powerful type of solar flare.

As usual, NASA's Solar Dynamics Observatory caught beautiful images of the sun's fireworks, which you can see above. (The flare is the area of bright white at the far left of the image).

Like its three predecessors, this solar flare was associated with a coronal mass ejection -- a mixture of plasma and other solar material released by the sun at the time of a solar flare. A report on SpaceWeather.com noted that although the sunspot from which the coronal mass ejection originated is not facing Earth directly, it is possible that part of it may be headed toward our planet.

When a coronal mass ejection hits Earth, it interacts with the planet's magnetic field, occasionally causing radio blackouts and, in extreme cases, disrupting power. It can also interfere with satellites and create beautiful, dynamic auroras.

Scientists have dubbed the active region of the sun that is creating these solar flares AR 11748. They still don't know much about this region or exactly why it is so active because it has just started to rotate into view from Earth.

"It's been hard to see completely because it was around the corner," Alex Young, a heliophysicist at Goddard Space Flight Center, told The Times on Tuesday afternoon. "We can see it is complicated, but it is hard to get a good picture -- we will have to wait till it rotates around."