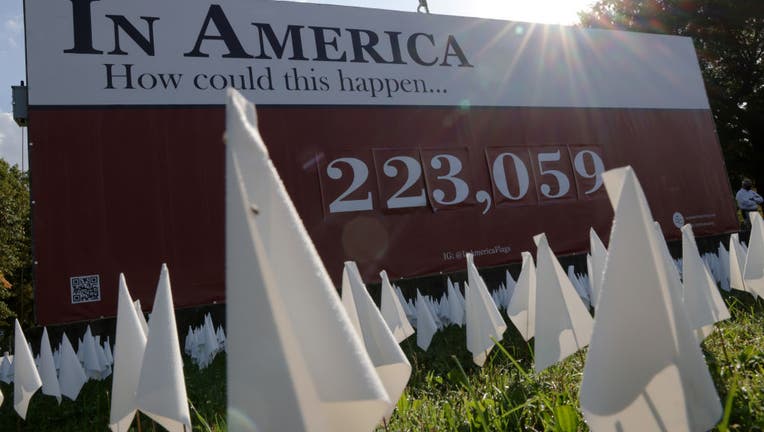 White flags are seen during a press preview of the public art project “IN AMERICA How could this happen…” on the DC Armory Parade Ground October 23, 2020 in Washington, DC. (Photo by Alex Wong/Getty Images)

LOS ANGELES - A recent study published in the journal “Nature Medicine” projected that the universal wearing of facial coverings could save more than 130,000 American lives from COVID-19 by February of 2021.

Scientists evaluated an array of outcomes based on three different scenarios state-by-state, and various mandates resulted in a drastically different overall death count related to COVID-19.

Researchers said that in a worst-case scenario, if states continue to ease up on mandates such as mask wearing, social distancing and other precautionary measures to protect against the spread of the novel coronavirus, the U.S. could reach between 759,693–1,452,397 COVID-19 deaths by Feb. 28, 2021.

In the best-case scenario, study authors defined a universal mask mandate in which the population of each state maintained a 95% level of mask use in public, which they said would result in the lowest projected cumulative death toll across the country, totaling at around 336,479–421,953 deaths by Feb. 28, 2021.

The most likely scenario, researchers said, is consistent with the current pace of “mandate easing,” with resulting increases in population mobility and number of person-to-person contacts. This scenario, researchers said, will result in roughly 511,000 total COVID-19 deaths between September 2020 and February 2021, “assuming that states would once again shut down social interaction and some economic activity at a threshold for the daily death rate of 8 deaths per million population.”

The study comes as deaths per day from the coronavirus in the U.S. are on the rise again, just as health experts had feared, and cases are climbing in practically every state.

Health experts had warned that it was only a matter of time before deaths turned upward, given the record-breaking surge in new cases engulfing the country. Deaths are a lagging indicator — that is, it generally takes a few weeks for people to be sickened and die from the coronavirus.

Michael Osterholm, a University of Minnesota expert on infectious diseases who warned over the summer of a fall surge, said what’s happening now is a confluence of three factors: “pandemic fatigue" among people who are weary of hunkering down and are venturing out more; “pandemic anger” among those are don’t believe the scourge is a real threat; and cold weather, which is forcing more Americans indoors, where the virus can spread more easily.

In August, U.S. Centers for Disease Control and Prevention Director Dr. Robert Redfield warned that Americans could face “the worst fall” season due to the potentially deadly combination of the novel coronavirus and the seasonal flu.

He blamed the impending calamity largely on people failing to abide by necessary COVID-19 preventative measures.

Deaths are still well below the U.S. peak of over 2,200 per day in late April. But experts are warning of a devastating winter, with a widely cited model from the University of Washington projecting about 386,000 dead by Feb. 1. A vaccine is unlikely to become widely available until mid-2021.

So far, there have been more than 8.6 million confirmed infections and over 225,000 deaths in the U.S., the highest totals anywhere in the world.