LOS ANGELES - A recent study from a team of researchers at Virginia Commonwealth University and Yale suggests that the total number of U.S. deaths from COVID-19 is likely much higher than what has been officially counted and reported.

According to the study, which was published on Oct. 12 in the Journal of the American Medical Association, from March 1 through Aug. 1, 1,336,561 people died of all causes in the United States, a 20% increase than the 1,111,031 deaths expected based on historical data from the National Center for Health Statistics and the U.S. Census Bureau.

"Excess deaths attributed to causes other than COVID-19 could reflect deaths from unrecognized or undocumented infection with [COVID-19] or deaths among uninfected patients resulting from disruptions produced by the pandemic," the study’s authors wrote.

Researchers said in a press release on the study that “states like New York and New Jersey, which were hit hard early, were able to bend the curve and bring death rates down in less than 10 weeks. Meanwhile, states such as Texas, Florida and Arizona that escaped the pandemic at first but reopened early showed a protracted summer surge that lasted 16-17 weeks -- and was still underway when the study ended.” 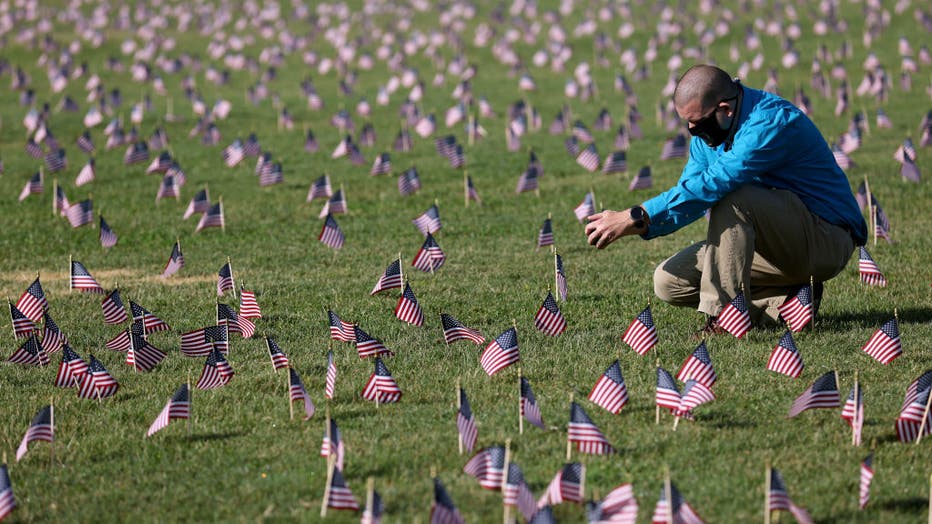 A man mourns the loss of his mother who died of COVID-19 at the COVID Memorial Project installation of 20,000 American flags on the National Mall. (Photo by Win McNamee/Getty Images)

"We can't prove causally that the early reopening of those states led to the summer surges. But it seems quite likely," said Woolf. "And most models predict our country will have more excess deaths if states don't take more assertive approaches in dealing with community spread. The enforcement of mask mandates and social distancing is really important if we are to avoid these surges and major loss of life."

Woolf said that the disparity in the COVID-19 death count in the U.S. can be explained by delays in reporting those deaths. Data limitations and miscoding in hospitals would also explain an inaccuracy of the total count.

"Some people who never had the virus may have died because of disruptions caused by the pandemic," said Woolf. "These include people with acute emergencies, chronic diseases like diabetes that were not properly cared for, or emotional crises that led to overdoses or suicides."

The researchers also found that throughout the entire country, deaths from dementia and heart disease had risen during the period that the study was conducted. Woolf added that Alzheimer’s disease and dementia deaths increased not only in March and April during the onset of the pandemic, but again in areas like the Sun Belt, which saw a spike in coronavirus cases in in June and July.

"The high death counts in Sun Belt states show us the grave consequences of how some states responded to the pandemic and sound the alarm not to repeat this mistake going forward," said Woolf.

While the immediate impact of the pandemic has been devastating, Woolf said long term data will uncover the true scope of the virus’ toll.

"Many people who survive this pandemic will live with lifelong chronic disease complications," he said.  "Imagine someone who developed the warning signs of a stroke but was scared to call 9-1-1 for fear of getting the virus. That person may end up with a stroke that leaves them with permanent neurological deficits for the rest of their life."