The delta variant has become the dominant strain of COVID-19 in the U.S. in the summer of 2021, driving up cases and hospitalizations.

A new preprint study suggests that Moderna’s COVID-19 vaccine may be significantly more effective against symptomatic disease from the delta variant compared to Pfizer-BioNTech’s vaccine, while the observed efficacy of both shots decreased.

Furthermore, two doses of both vaccines were shown to strongly protect against hospitalization and death.

Researchers found the effectiveness of Pfizer’s two-dose vaccine dropped from 76% in early 2021 to 46% in July, as the delta variant became dominant in the United States. During that same time period, Moderna’s two-dose shot dropped from 86% to 76%.

The observational study, published Aug. 8 and yet to be peer-reviewed, included more than 50,000 patients in the Mayo Clinic Health System, which runs hospitals and clinics in Minnesota, Iowa and Wisconsin.

The study authors noted that the delta variant’s prevalence in Minnesota increased from 0.7% in May to over 70% in July, while the prevalence of the alpha strain decreased from 85% to 13% during the same timeframe.

Nationwide, the delta variant accounted for an estimated 83% of all U.S. COVID-19 cases by July 20, according to the U.S. Centers for Disease Control and Prevention.

In a matched cohort across multiple states, the researchers found that those fully vaccinated with Moderna’s vaccine "were about half as likely to experience breakthrough infections" as the Pfizer recipients. In Florida, which has been experiencing its largest virus surge since the onset of the pandemic, the risk of infection in July after full vaccination with Moderna was about 60% lower than after full vaccination with Pfizer, the study authors added.

The study also noted that there didn’t appear to be a difference in the rates of complications experienced by COVID-19 patients with breakthrough infections based on which vaccine they received.

"We observed a pronounced reduction in the effectiveness of (Pfizer-BioNTech’s vaccine) coinciding with the surging prevalence of the Delta variant in the United States, but this temporal association does not imply causality, and there are likely several factors contributing to changes in vaccine effectiveness over time," the author wrote.

It noted how Moderna is given in a stronger dose than Pfizer and at different intervals (28 days versus 21 days, respectively). 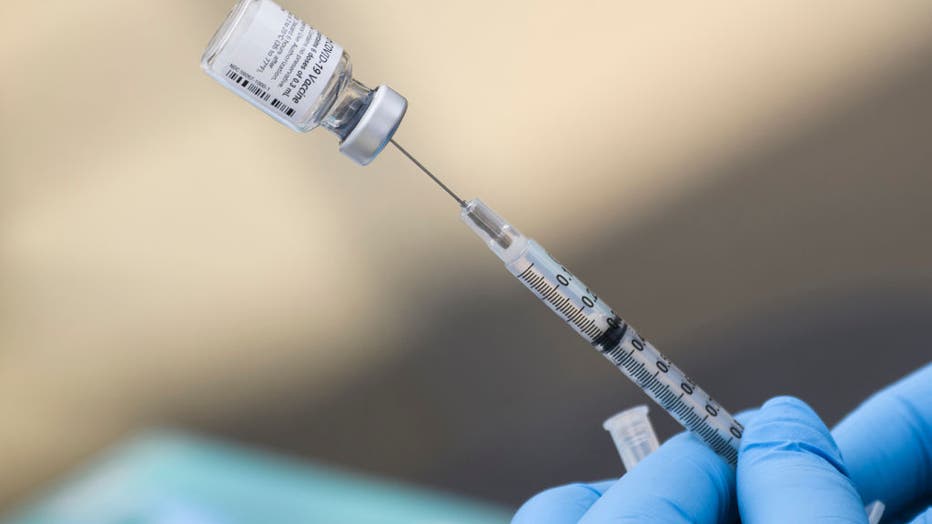 FILE - A syringe is filled with a first dose of the Pfizer COVID-19 vaccine at a mobile vaccination clinic at the Weingart East Los Angeles YMCA in Los Angeles, California on Aug. 7, 2021. (Photo by PATRICK T. FALLON/AFP via Getty Images)

But Dr. Venky Soundararajan of the data analytics company nference, who led the study, told Reuters that a Moderna booster shot may be necessary for anyone who received the Pfizer or Moderna jabs earlier this year.

Pfizer did not immediately respond to a request for comment. But previous research has suggested a higher efficacy against the delta strain from Pfizer’s vaccine.

A study published in the New England Journal of medicine last month revealed that two doses of the Pfizer vaccine are 88% effective against symptomatic disease from the highly contagious strain. The findings reinforced an earlier study from Public Health England in May that found the Pfizer vaccine was also 88% effective against symptomatic disease from the delta variant two weeks after the second dose.

In late July, Pfizer shared data about a third dose of its COVID-19 vaccine that suggested it "strongly" boosts protection against the more contagious delta variant. The initial data indicated that a third shot of its original two-dose vaccine produced neutralizing antibody titers against the delta variant that are more than five times higher in younger people and more than 11 times higher in older people than after two doses.

The company said on July 28 that it expects to publish more definitive data about a booster dose in the coming weeks, which will be shared as part of the ongoing discussions with the U.S. Food and Drug Administration and other global regulatory authorities.

The delta variant has fueled a surge in new cases and hospitalizations in the U.S., largely among those who remain unvaccinated. To date, 50.3% of the total U.S. population is fully vaccinated, CDC data shows.