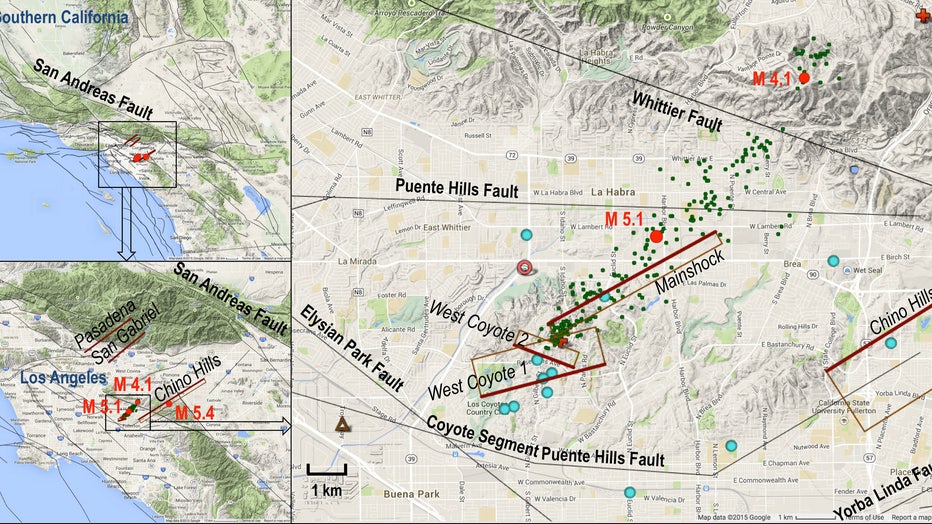 
LOS ANGELES (AP) — There is a 99.9 percent chance of a magnitude-5 or greater earthquake striking within three years in the greater Los Angeles area, where a similar sized temblor caused more than $12 million in damage last year, according to a study by NASA and university researchers.

The study released Tuesday was based on Global Positioning System and airborne radar measurements of how the Earth's crust was deformed by the magnitude-5.1 quake on March 28, 2014, in La Habra, about 20 miles southeast of downtown Los Angeles. Damage included broken water mains and cracked pavement.

By comparison, in 1994 the magnitude-6.7 Northridge earthquake left $25 billion in damage, caused dozens of deaths and injured 9,000 people.

The study looked at a 62-mile radius around the La Habra epicenter. Researchers observed shallow movements of the ground, took into account a deficit in the number of earthquakes expected there and calculated how much strain may remain in deeper faults that are still locked.

While the magnitude-5 quake was found to be extremely likely by April 1, 2018, one of magnitude-6 or higher was pegged at just 35 percent and the largest potential quake was estimated at 6.3.

Study leader Andrea Donnellan, a geophysicist at NASA's Jet Propulsion Laboratory, said the research is not a prediction. "It's a statistical probability that we computed," she said in an interview.

The U.S. Geological Survey took issue with the study, asserting that it was unclear how the study derived its numbers and that the accepted probability is 85 percent.

Responding to the criticism, Donnellan said the study's references to other scientific papers would allow other researchers to reconstruct the process.

According to the most recent Uniform California Earthquake Rupture Forecast, which was published in March and is the basis for the agency's National Seismic Hazard Maps, the Southern California region has a 100 percent chance of one or more magnitude-5 or larger quakes and a 93 percent chance of a 6.7 jolt during the next 30 years.

Thousands of older wood and concrete apartment buildings vulnerable to collapse in a major earthquake would get costly upgrades under sweeping retrofitting rules passed this month by the Los Angeles City Council.