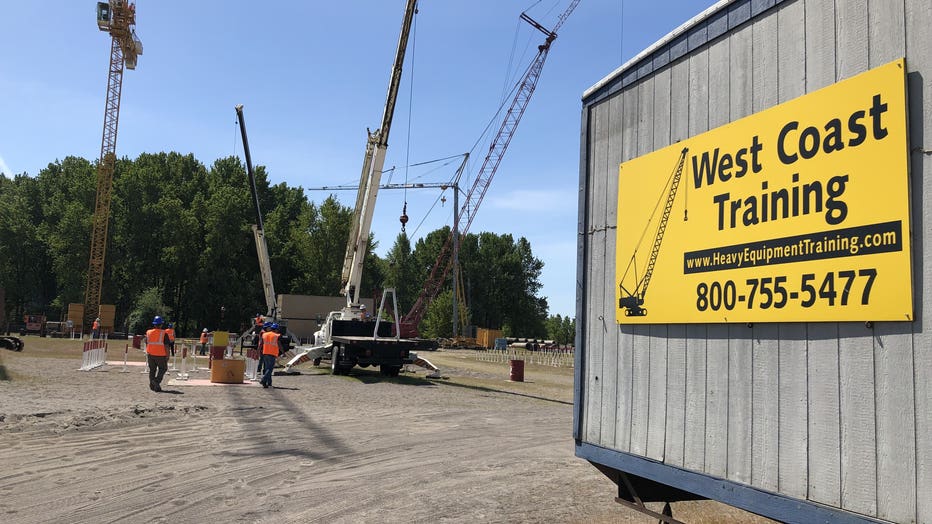 “It’s kind of like being a kid in a sand box with a lot of regulations,” said Crane operator student Kris Morton.

Kris has just three weeks left before he graduates from West Coast Training’s Crane Operator School and he says safety is top of mind.

Just two weeks ago, we saw the deadly consequences of a crane collapse in Seattle with four people dead including two crane operators.  Lead Instructor Stever Frein says he can’t stress safety enough to his students after the Seattle crane collapse.  With nearly 40 years in the industry, Stever shares this advice to students.

“Stay a little bit afraid of their crane. No matter how long they’ve been in it, they don’t want to get too comfortable because it can always bite you,” said Frien.

He says even the smaller, mobile cranes pose a threat.

“Going out and getting crushed, going over a bank, or going through the front windshield,” said Frein.

Around Seattle, you’ll see multi-year construction projects and tower cranes to go with them.  Stever says if there’s a collapse or accident, there’s nothing protecting the crane operator, so it normally ends in a fatality.

“I’ve seen fatalities in the crane industry. I’ve seen people getting hurt bad enough they were in the hospital for quite a long time,” said Frein.

He says it is part of the reason there’s a shortage of crane operators across the nation.  But if you get the certifications, Frein says you’ll get rewarded in pay.

For Kris, a big payday is a big motivator.

“With a lot of pay comes a lot of responsibility,” said Morton.

The sky’s the limit for the cranes and Kris and his classmates after a rigorous eight weeks of school.

“Just about every student that comes out of here has a job when they leave here,” said Frein.

Frein says the Seattle crane collapse didn’t deter any students from continuing with coursework.  Although, he says it did make a few of them more fearful of tower cranes.  West Coast Training offers a variety of eight-week courses.