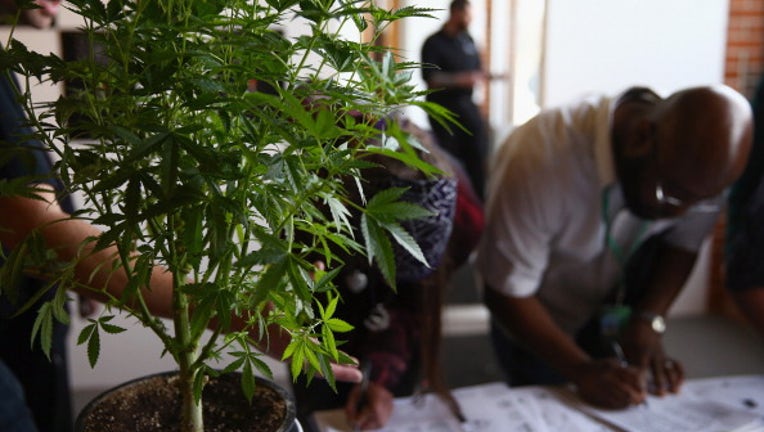 A cannabis plant greets job seekers as they sign in at CannaSearch, Colorado's first cannabis job fair, on March 13, 2014 in Denver,

DENVER — It was spring break, and Levy Thamba, a 19-year-old college student from Africa, had checked into a fourth-floor hotel room with three of his buddies. They had come from their small college in Wyoming looking for an adventure.


No one is sure how much Thamba ate of the marijuana cookie purchased by one of his friends at a local pot shop. But soon the engineering student, who had never tried marijuana before, began acting strangely hostile, tearing around the room and pulling pictures from the wall.

Sometime in the early hours of March 11, Thamba leaped over the balcony to his death.

Thamba died from injuries suffered in the fall, the coroner's office ruled last week, but the report made an unusual notation: The death, involving a victim with no history of mental problems or suicidal tendencies, was linked to "marijuana intoxication."

Authorities are calling the incident the state's first marijuana-related death since Colorado legalized sales of recreational marijuana at the beginning of the year to those over 21.

The case has become a grim exhibit in a growing case file as Colorado health officials wonder whether, in the rapid rollout of legalized marijuana, adequate attention was paid to potential health risks of its use, especially in the little-scrutinized area of edible marijuana.

"We do know that marijuana is not without harm," said Tim Byers, an associate dean at the Colorado School of Public Health, as he listed potential consequences including cancer, lower IQs and a possible trigger for latent psychosis associated with heavy or long-term use. There is also emerging research that fetal, infant and childhood development can be damaged if a woman uses marijuana while pregnant or breast feeding.

Doctors have also documented shorter-term medical complaints associated with marijuana use, especially in its edible forms, including anxiety, nausea, vomiting, shortness of breath and hallucinations. Doctors at the Telluride Medical Center in the Colorado ski resort town report patients with symptoms resembling a severe anxiety attack. Some think they are having a heart attack.

"The marijuana of 2014 is not the marijuana of 1969," warned Byers, who said he was concerned by the lack of research surrounding the higher potency of the drug's current forms.

Last month, 350 public health experts, doctors, researchers, educators, law enforcement officials and advocates on both sides of the legalization debate gathered for a symposium here to discuss what the current scientific research says about marijuana use — and what is still missing.

At the standing-room-only event, held in a meeting hall called Mile High Station, Byers made clear he was not interested in debating the merits of the 2012 initiative that made recreational use of marijuana legal in Colorado. "That decision has already been made," he said.

The problem, public health officials say, is that nearly all of the regulations associated with the new law focus on growth, sales and public use of the product. Health aspects are addressed primarily in limits for operating an automobile: drivers face penalties if caught with a blood level greater than 5 nanograms per milliliter of THC, the active ingredient in pot.

More attention needs to be focused on edible forms of the drug, which are especially popular with first-time users, health officials say. The treats, candies and elixirs are among the hottest new products since pot became legal, making up 40% of all sales so far. And while edible products are packaged with warning labels and potency levels, officials worry those cautions may not go far enough.

By law, such products can contain no more than 10 milligrams of THC per serving, but often consumers don't pay attention to serving sizes. One large brownie can contain up to 10 servings, or 100 milligrams, of THC.

Dr. Paula Riggs, a psychology professor and director of the division of substance dependence at the University of Colorado Denver, says smoking marijuana hits the central nervous system quickly. But edible marijuana has a delayed reaction so people often keep eating, looking for a buzz. "A half-hour later they are on their back," she said.

Health officials also are concerned that edible marijuana could be become an on-ramp for pre-teens and teenagers to regular marijuana use.

Frequent marijuana use by adolescents at a time when their brains are still developing has been linked in some research to the loss of 6 to 8 IQ points in adulthood — a result not dissimilar from lead poisoning, Riggs said.

There already are incidences of young children ingesting edible marijuana. Even before passage of the legalization initiative, at least 14 children who had ingested marijuana went to the emergency room at Children's Hospital Colorado between 2009 and 2011, according to a study reported in the Journal of the American Medical Assn.

All were under 12; one was 8 months old. Two of the children ended up in the intensive care unit. Symptoms ranged from sleepiness to coma.

In the four years prior, before medical marijuana use in the state skyrocketed, there were no such cases.

"Any drug, including alcohol, tobacco, caffeine, prescription medication — and marijuana — are going to have health risks," said Rachel Gillette, Colorado executive director of the National Organization for the Reform of Marijuana Laws, a lobbying and research organization that backs marijuana legalization.

Gillette said legalization advocates welcomed more research: "It benefits everybody." At the same time, she said, such research should include potential health benefits of marijuana use, including its possible use in treating epilepsy, seizures in children and post-traumatic stress disorder.

In the case of Thamba, the young student from Democratic Republic of Congo who died, toxicology reports showed no other drugs or alcohol in his blood, but his THC level was 7.2 nanograms per milliliter — above the legal driving limit. Police are continuing the investigation to determine who bought the cookie and whether charges will be filed.

Though the severity of symptoms and frequency of patients are still less than those associated with alcohol overdose, Dr. Scott Bentz, medical director of emergency services at Presbyterian/St. Luke's Medical Center in Denver, said he found himself facing a new and troubling health issue.

"All of the old studies and textbooks and toxicology are based on the effects of inhaled marijuana," he said. "The edibles are uncharted territory for those of us in emergency medicine."