The wind had let up by Thursday afternoon, but not before it did extensive damage around town.

At sea, a boat ran aground near Squalicum Harbor after the winds broke the mooring lines while three fishermen were sleeping inside.

“I knew that was a little bit too much movement and went to the back deck and realized we were getting banged against some rocks and pilings that we weren’t against the evening before,” said Jacob Imholt, a fishermen on the vessel Bergen, who was rescued by the U.S. Coast Guard.

The 52-foot fishing vessel ended up crashing up against the rocks early Thursday morning.

“The wind is just picking up your boat, slamming it and it has your 52-foot vessel on its side,” said Imholt as he described the scene.

The Coast Guard moved quickly to rescue the three men, who ended up clinging to the wooden boat

“It was pretty scary. The way the boat was moving, the way the waves were pounding on the side of the fishing boat, it could have gone at any time or the boat could have split and all 3 men could have ended up in the water,” said Charles Chavtur, Chief Warrant Officer for the U.S. Coast Guard.

Eventually the Coast Guard was able to maneuver a boat close enough to the damaged vessel and rescue all three men.

One had hypothermia and minor leg injuries.

The boat ended up breaking into pieces as the strong waves kept slamming into it all day.

“It wasn’t easy to get us off the boat,” added Imholt, “it was intense and as a fisherman you stay calm and make a good judgment, that’s what you’re programmed for.”

The Department of Ecology spent the day assessing the damage but said the weather was too dangerous for crews to move in and begin the cleanup process.

The same winds caused some problems around town.

“It was predicted that we would have a storm and high winds but I’m surprised it was this bad,” said Diane, who lives in Bellingham.

She said the top of a tree came crashing down onto the back of her deck.

The wind was so bad it knocked down numerous trees and one of those trees nearly missed a house on Chuckanut Drive.

Outside Cornwall Park in town, the entrance was blocked by a giant tree.

Just a few blocks away, West Maryland Street had a power line knocked down, causing that area to be blocked off.

“The wind has been crazy. It’s pretty extensive out in the count where you can hear it all night long and stuff hitting the side of house,” said Tommy Moore, who lives in Custard.

Outside the Home Depot on Telegraph Road, there was a big mess after strong winds ripped of the siding to the front of the store building. 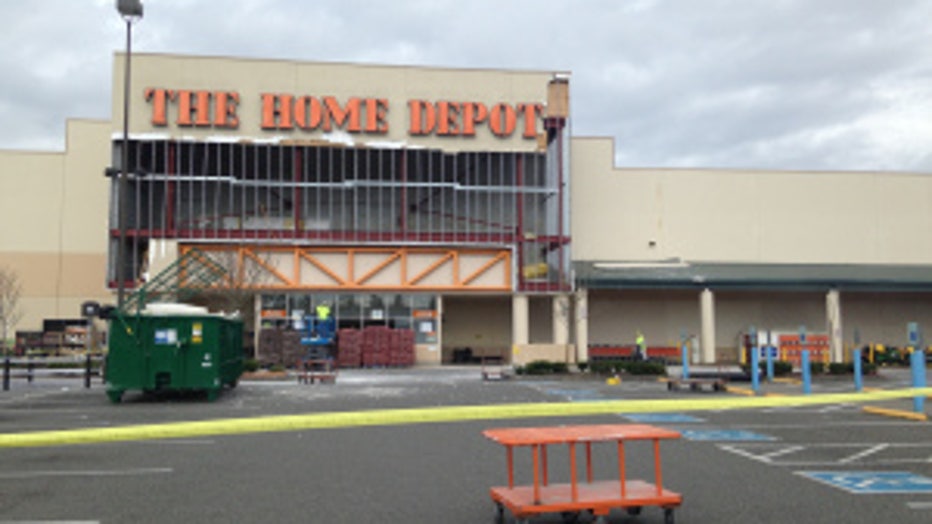 The flying debris missed hitting anyone but the wind did cause some damage to other items around the store.

Crews will work to replace the side of this building over the next few days as people around town will work on doing their own cleanup.