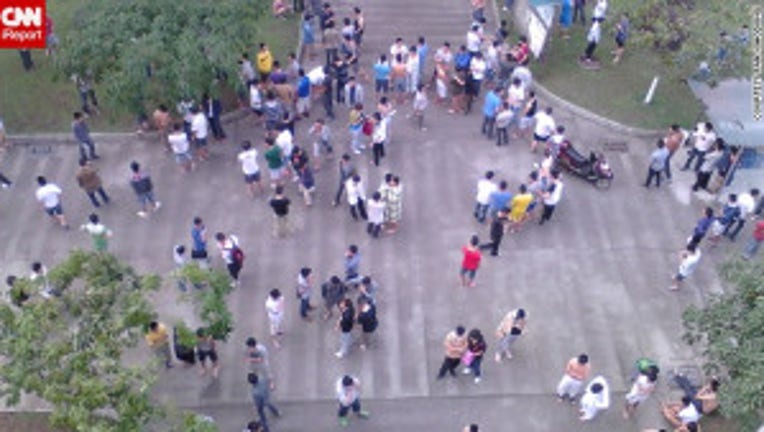 Students gather outside a dormitory building in Chengdu, China after an earthquake. (CNN)

The quake struck just after 8 a.m. local time about 70 miles away from the provincial capital, Chengdu, at a depth of around 6 miles, according to the U.S. Geological Survey. There was conflicting information about the earthquake's strength, with the USGS putting the magnitude at 6.6 and the China Earthquake Networks Center gauging it at 7.0.

It was followed by at least eight aftershocks of magnitudes between 4.5 and 5.1, the USGS said.

Preliminary reports indicate at least 32 people have been killed and more than 600 injured, Xu Mengjia, the Communist Party chief of Yaan, the city at the epicenter, told state broadcaster CCTV.

Xu said that because of landslides and disruption to communications in the area, determining the number of casualties may take some time.

Photos circulating on social media suggested the quake may have caused considerable damage to buildings.

Authorities have responded by sending rescue workers to the area around the epicenter, shutting down the airport in Chengdu and suspending high-speed rail operations, state media reported.

The event stirred memories of the devastating earthquake that hit Sichuan in 2008, killing more than 87,000 people.

First responders to Saturday's quake reported that the damage caused didn't appear to be as severe as what was seen in the aftermath of the 2008 disaster, according to CCTV.

The epicenter was in Lushan country, a district of Yaan. That area is home to China's famous giant pandas and houses the country's biggest panda research center.

CCTV reported that the panda facility is about 40 kilometers away from the epicenter.

Fan Xiaodong, a student in Chengdu, said when the tremors began to shake buildings in the city, many of his startled classmates rushed out of their dorms, some of them wearing only the clothes they'd been sleeping in.

At first, Fan said, he only felt a slight trembling as he dozed in bed.

"I thought it was my roommates shaking the bed," he said. "But the shock became stronger soon, and it came to me that an earthquake happened."

Residents of Chongqing, a sprawling metropolis more than 300 kilometers from Yaan, said the quake also shook buildings there.