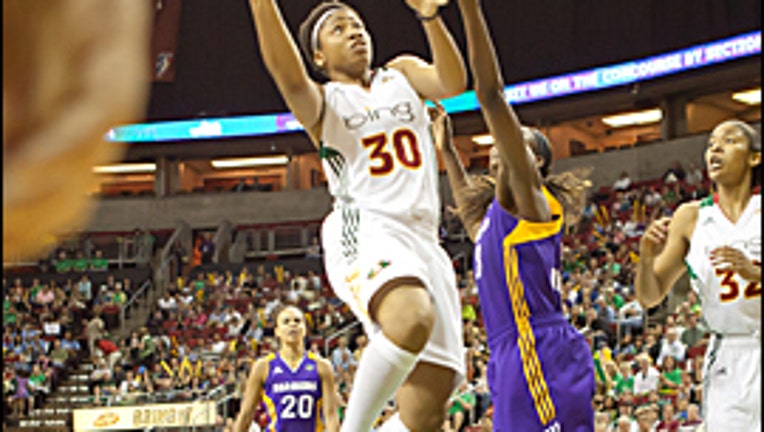 Seattle — The Seattle Storm beat the Phoenix Mercury 75-72 in front of a sellout crowd at KeyArena.

Phoenix was paced by Candice Dupree, who scored 18 points and had five rebounds. Brittney Griner added 17 points and seven rebounds. Diana Taurasi had 10 points in the losing effort.

With it’s trademark defense, the Storm frustrated Diana Taurasi and Brittney Griner. Taurasi was kept at bay most of the night, scoring only 10 points, as she accumulated 5 personal fouls. Griner who scored 17 points, was bothered all night by the waves of Storm players defending her in the post. Her frustration showed with a flagrant foul after setting an illegal screen and a technical foul for slamming the ball into the media table after a missed pass.

Griner led all players with seven rebounds, while Tina Thompson had six for the Storm. Temeka Johnson had six assists and Shekinna Stricklen had 11 points. Charde Houston led Phoenix with 6 assists. Tina Thompson was  the Player of the Game in front of 9,686 fans

at Key Arena. This is Thompson’s first game since the announcement of her retirement.

The Seattle Storm are back in action Friday, June 7th when the Tulsa Shock come to town. Tipoff is at 7 P.M.