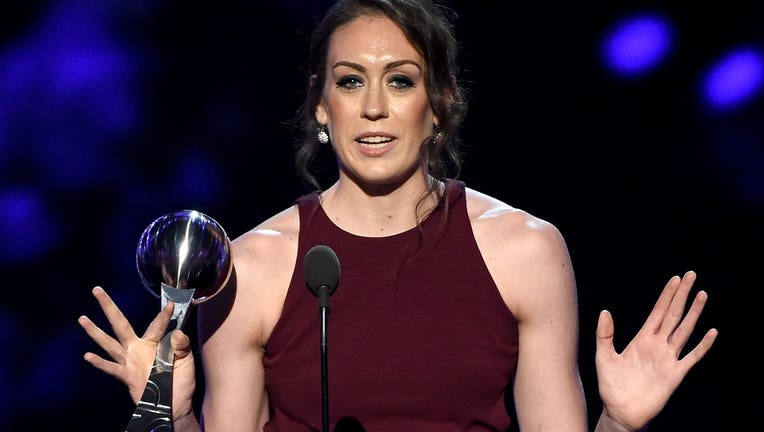 NEW YORK - It’s been an incredible month for Breanna Stewart.

She helped the U.S. win a seventh consecutive gold medal in the Olympics and the Seattle Storm take the inaugural WNBA Commissioner’s Cup championship. As great as those two accomplishments are, they both pale in comparison to becoming a first-time mom.

Stewart and wife Marta Xargay Casademont welcomed daughter Ruby Mae Stewart Xargay via surrogate on Aug. 9. That occurred a day after the Americans won the gold in Japan, beating the host team 90-75.

"Being able to welcome our daughter into the world is crazy to say," Stewart told The Associated Press on Friday before the Storm played the Liberty. "It’s a moment you can’t put into words. I’m super glad she’s healthy. Now we have another addition to the family."

Once Stewart returned from Japan, she boarded a plane to Idaho to be with Xargay and watch Ruby be born. She was worried that the baby might be born early while she was still in Tokyo, but Ruby cooperated.

The newest addition to the family weighed 9 pounds, 4 ounces. Stewart said she cut the umbilical cord and laid her newly won Olympic gold medal at her daughter’s side.

"It was super emotional," Stewart said. "Tear-jerking type of moment. Our daughter came into the world. It was one of the best moments of our lives."

Stewart and Xargay announced the birth via social media earlier this week.

The 26-year-old is the most prominent player to become a mother since the WNBA agreed to its new CBA before the 2020 season. Stewart and Seattle teammate Sue Bird froze their eggs in 2019 before the labor agreement happened. Still family planning was a major gain for the players and Stewart will be able to take advantage of the full maternity leave and other benefits if she wants.

Stewart, who earned MVP honors of the Commissioner’s Cup on Aug. 12, took a week off from playing to be with her wife and newborn daughter. She returned to the team on Friday night, joining Seattle in New York.

"The last 11 days have been long," Stewart said. "It was a lot and I was just focusing on one thing at a time. I wanted to be with my teammates for the Commissioner’s Cup and wanted to spend quality time with Marta and Ruby."

Stewart and Xargay got married in July after getting engaged two months earlier. They kept their plans for starting a family quiet, only telling a few people.

"My friends and family kept it in the circle and we trusted people to keep our private life private," Stewart said.

Stewart said Ruby is happy with a pacifier and bottle right now, but it’s only a matter of time before a basketball — at least a stuffed one — might be near the newest member of the family. Stewart said she and Xargay have been able to sleep well as Ruby has been "awesome so far."