WASHINGTON - Attention, potential car buyers: New electric vehicle charging stations are on their way to highway locations near you.

All 50 states received final approval Tuesday to begin construction on a first nationwide network of EV charging stations that places one roughly every 50 miles (80 kilometers) along interstate highways, part of the Biden administration’s plan to spur widespread adoption of zero-emission cars.

The Transportation Department said it had OK’d EV charger plans from a last set of 17 states, triggering the release of $1.5 billion in federal funds to all jurisdictions nationwide — or $5 billion over five years — to install or upgrade chargers along 75,000 miles (120,000 kilometers) of highway from coast to coast, with a goal of 500,000 EV chargers nationwide. Plans for the other 33 states and the District of Columbia were approved earlier this month.

By year’s end, drivers could start seeing expansions and upgrades to existing highway EV stations in states such as California, Colorado, Florida and Pennsylvania that now feature at least four fast-charger ports, enabling EVs to fully recharge in about an hour.

Construction of new EV charging locations could begin by next spring.

"America led the original automotive revolution in the last century, and ... we’re poised to lead in the 21st century with electric vehicles," said Transportation Secretary Pete Buttigieg. He said the plans will "help ensure that Americans in every part of the country — from the largest cities to the most rural communities — can be positioned to unlock the savings and benefits of electric vehicles." 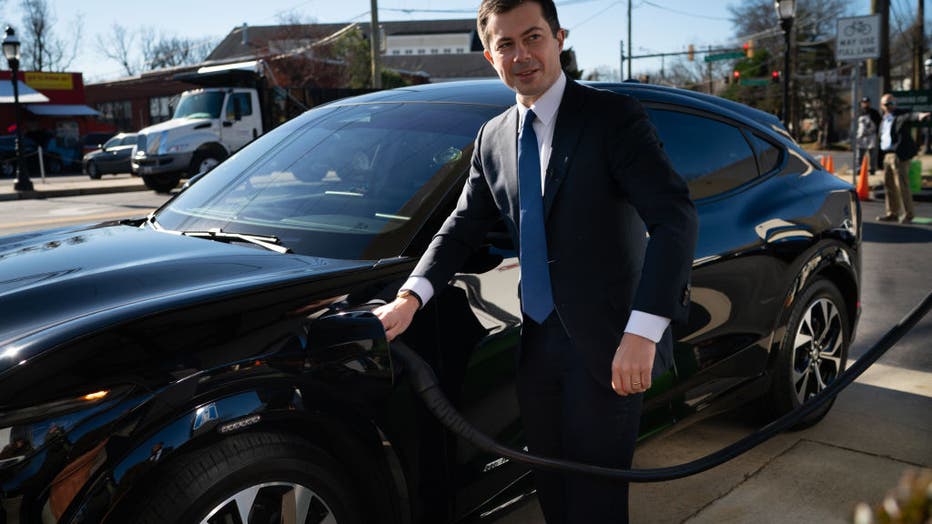 The approval is a major step toward building widespread acceptance and use of electric vehicles among consumers, who most often express hesitancy over EVs’ shorter range and limited availability of public chargers. President Joe Biden has set a goal that 50% of new U.S. car sales be electric by 2030, and his administration touts new tax credits next year of up to $7,500 as making electric vehicles accessible for everyday Americans. Still, the five-year plans suggest a potentially long and bumpy road ahead for a highway EV network, with states citing risks such as a lack of electricity grid capacity, supply chain shortages and equity concerns.

For instance, while Texas, California and Florida say their grid should be able to handle increased capacity of a million or more EVs, other states aren’t so sure.

"Capacity will become a concern in future years as charging infrastructure and EVs become more ubiquitous," New Mexico said in its plan.

Vermont wrote that "Unmanaged or unplanned for EV charging could cause utilities to incur significant costs to maintain grid reliability and create challenges for grid operators" and that some locations "may also necessitate intensive grid upgrades and buildout."

Mississippi cited potential shortages of EV charging station equipment, which it said "may cause significant setbacks" in construction. Several states also expressed concern that they would not be able to acquire charging stations that meet the American-made provisions.

Under the Transportation Department requirements, states also must focus first on more expensive fast chargers on highway routes that typically cost $40,000 to $100,000 to install, rather than keying in on neighborhoods and communities with Level 2 chargers that are cheaper but take a few hours to provide a full charge.

Currently, electric vehicle owners charge their vehicles at home 80% of the time, typically at single family houses. But that is likely to change as the less affluent who don’t have a garage to house a charging station buy EVs.

Biden’s bipartisan infrastructure law provides an additional $2.5 billion for local grants to fill remaining gaps in the charging network in rural areas and in disadvantaged communities, which are less likely to own the higher-priced electric vehicles or have charging stations readily available near them. The Federal Highway Administration said Tuesday that it will begin taking applications for that money later this year.