SEATTLE – The legislative session in Olympia started with a black cloud hanging over the Legislature.  One lawmaker resigned amid sexual harassment allegations.  Another lawmaker hasn’t been to Olympia since this past fall after a Seattle woman accused him of rape.

Back in September, Candace Faber sent out a flurry of tweets saying state Sen. Joe Fain of Auburn raped her in 2007.  Now, state senators are standing by a decision to not hire an outside investigator to look into rape allegations against Fain.

At the start of the legislative session, one senator’s chair was empty, while one voter plans to amplify her voice.

The spotlight is dimming on Faber after garnering national attention in September when she tweeted that Washington State Senator Joe Fain raped her 11.5 years ago.  State lawmakers demanded an investigation, but Faber remained skeptical. 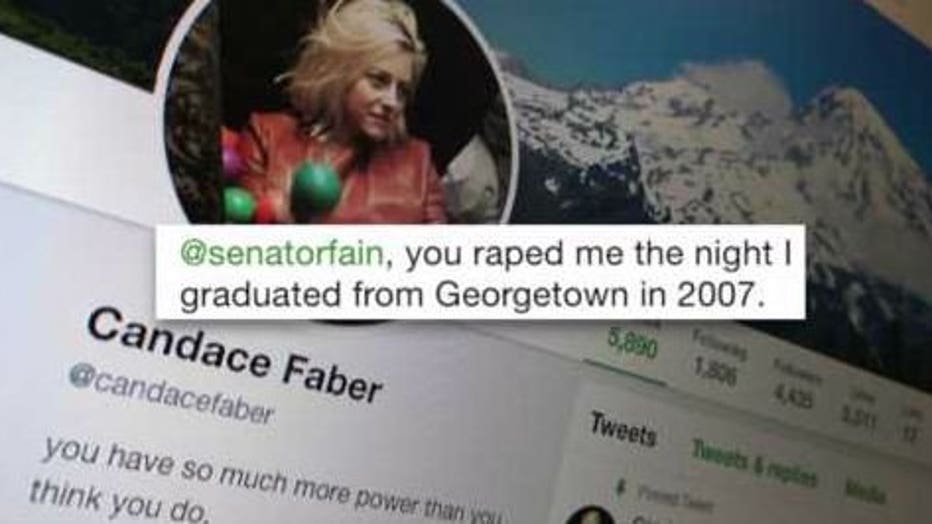 In September, Seattle woman Cadace Faber tweeted that former State Senator Joe Fain raped her in 2007 after her college graduation.

“There was no process and there was nothing and no one had contacted me.  People were making statements 'there should be an investigation' and talking to fain and quoting him, but I wasn’t part of that process,” said Faber.

While Senate Democrats wanted an investigation, Senate Republicans backed out of sanctioning an investigation.  This put Faber’s allegations that were once in the forefront in Olympia on the back burner.

“Getting to Georgetown felt like the biggest accomplishment to date,” said Faber.

During the same weekend she graduated from Georgetown University in 2007, she says she and her parents went to the US Capitol for a light reception.  That’s where she says she met former State Senator Joe Fain for the first time.  But back then, he was just an aspiring politician from her home state.

“I remember my dad asking me if I had been in touch with that nice young Republican that we had met at the Capitol,” said Fain.

Faber says she then sent this email to Fain, dated Thursday, Mary 17, 2007.  Faber writes, “Feel free to call if you’re bored and friendless tomorrow or Saturday.”

“I’m not responsible for what happened to me for inviting him out. That was like a normal thing to do,” said Faber. 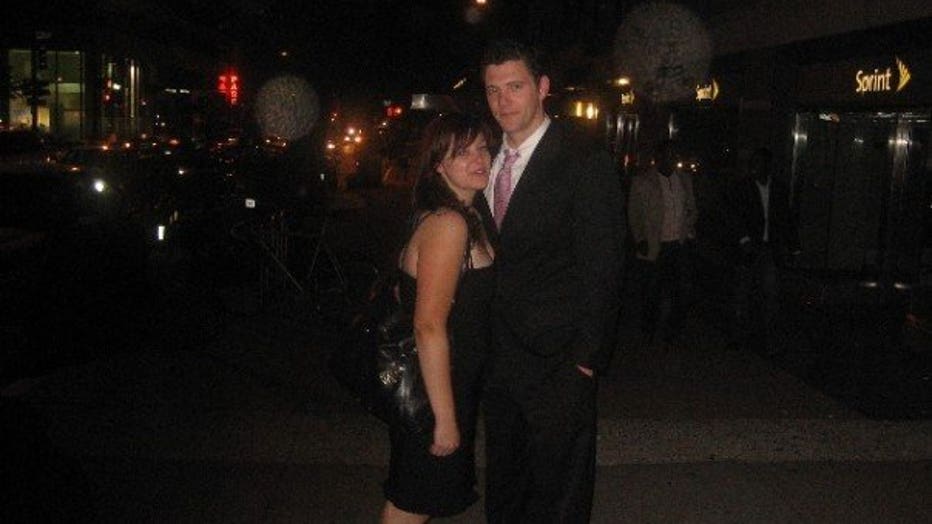 Candace Faber sent this picture to Q13 News. She says this is a picture of her and former Senator Joe Fain in May 2007 on the night of the alleged rape.

Faber says Fain joined her and her friends at a bar where she willingly kissed him.  But later that night, she says he got so drunk, she reluctantly agreed to take him back to his hotel.

“I remember literally bearing the weight of his body to get him up the stairs,” said Faber.  “From the moment he started kissing me I was grabbing his hair to yank his face off of mine.  There was no possible way that he could not know that I was actively not consenting. I said no with my mouth. I said the words no. I said the words stop. I tried to push him off of me numerous ways, numerous times.”

Faber says Fain kept kissing her and then pinned her down to rape her.

“Everything that he did and indicated that he knew he was raping me and that he enjoyed it because he was raping me. When I said no, he said that’s so hot. He said keep doing that,” said Fain.

After the alleged rape, she says she feared speaking out would cost her the career in the Foreign Service she had been working for.

“I didn’t feel like I had any options other than to find a way to move on from it,” said Faber.

While Sen. Fain has repeatedly declined on-camera interviews, he did release a statement, writing, “I absolutely deny what Ms. Faber is accusing me of.  Any allegation of this serious nature deserves to be heard and investigated for all parties involved.  I invite and will cooperate with any inquiry.  I ask everyone to show respect to Ms. Faber and to the process.”

Faber says a year after the incident, she received a campaign email from Joe Fain.  She forwarded that email to her friend writing, “This is the guy who date-raped me a year and a half ago.”

But she never spoke about the alleged rape publicly until this past September.  Her allegations coming in the middle of Joe Fain’s re-election campaign against Democratic challenger Mona Das.

“I did not know he was up for re-election,” said Faber.

“Were you paid by the Mona Das campaign to make up these allegations?” asked Q13 News Reporter Nadia Romero.

“Is that a real question?” asked Faber.

“Did you pay Candace Faber to make those accusations?” asked Romero. 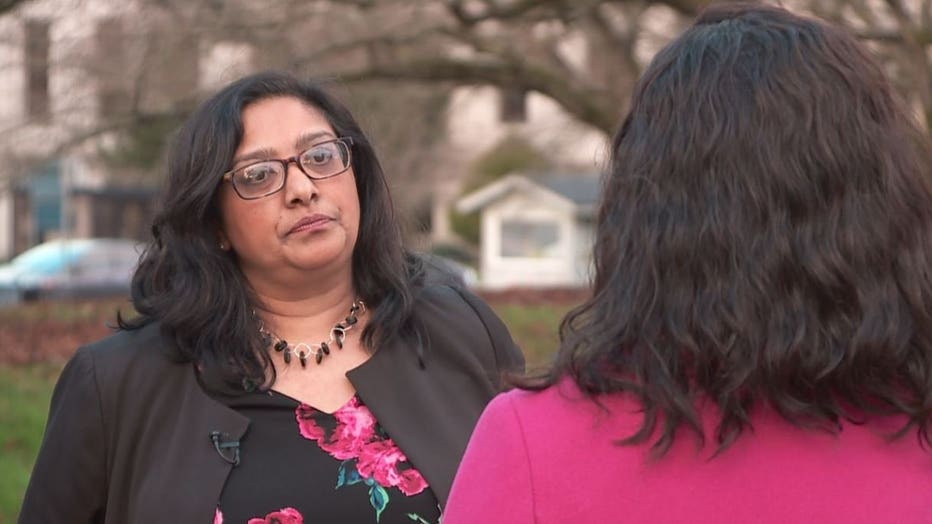 47th District State Senator Mona Das (D) says she did not know Candace Faber was going to accuse Joe Fain of rape until after she saw Faber's tweets. She also says she did not pay Faber or orchestrate the allegations.

After her tweets, Faber says she door knocked for the Das campaign, but they didn’t ask her to.

“As a survivor myself I know how hard it is to do what Candace did and I am absolutely proud of her to do it and standing up,” said Das.

Fain released another statement in December:

“As I’ve said repeatedly since this false allegation first arose towards the end of my reelection campaign, I welcome an investigation.  I look forward to learning more about the process envisioned by Senate Democratic party leadership. I do, however, share Senator Ann Rivers and Randi Becker's concerns that this may be a political, rather than a neutral, investigation. The Democrats' motivation in pursuing this inquiry is unclear as the alleged event occurred years before I served as a Senator and I will no longer be in the Senate in January. Nonetheless, I remain confident that a fair and impartial process will clear my name. I am hopeful that Democratic leadership will ensure that this inquiry is conducted in such a manner." 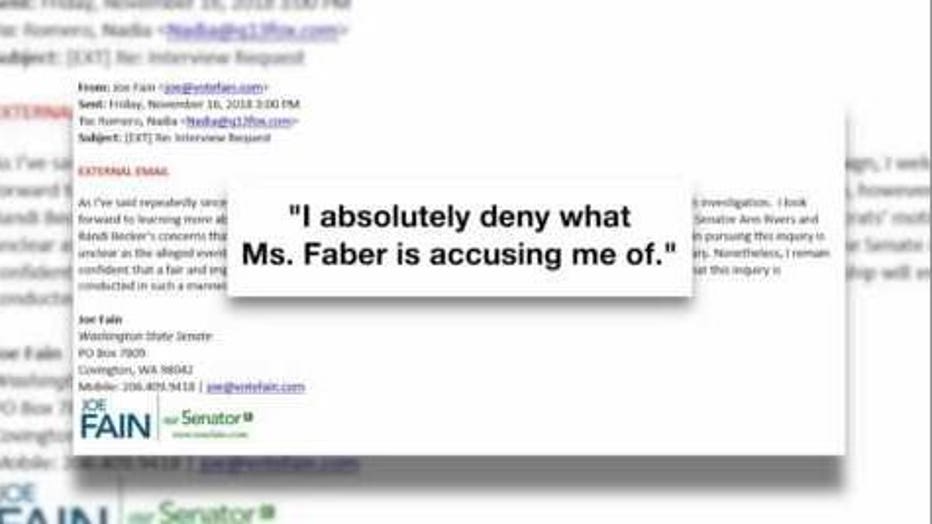 Das replaces Joe Fain in the 47th District.  She’ll have to work alongside Senators who don’t believe Candace Faber.  That includes Senate Minority Whip Ann Rivers.  She’s one of a list of Republicans who originally supported the investigation and then called it a witch hunt once Fain lost the election.

“What would we do with the information for a non-member anyway? It just didn’t seem to make much sense,” said Rivers. 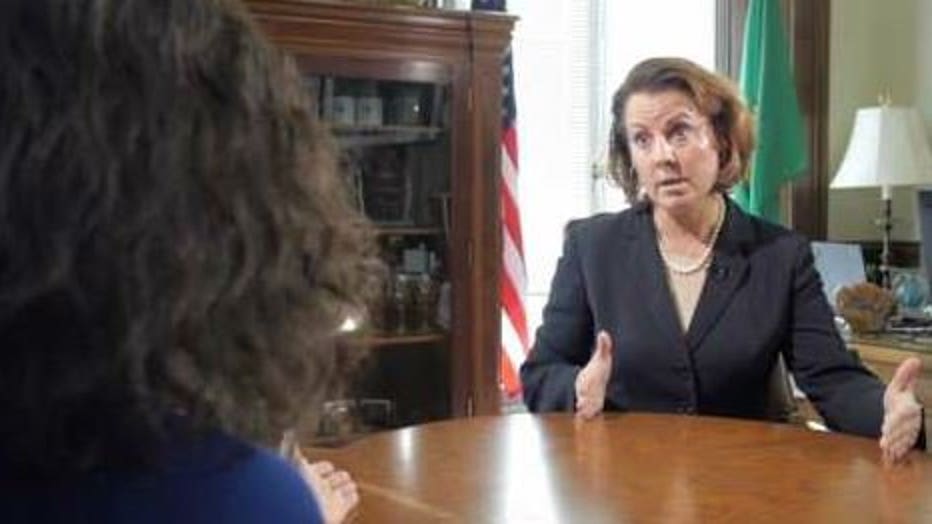 Minority Whip State Senator Ann Rivers (R) initially supported the investigation into Faber's accusations. After he lost the election, Rivers pulled her support and joined other republican lawmakers who called an investigation a 'witch hunt.'

“I do not believe that he is a rapist,” said Rivers.

“Talk to a lot of survivors, not just me. Do the user research. Figure out what’s broken. See where the pain is, go there. And do something about it. We have that power,” said Faber.

Faber says she won’t go through the criminal justice system because she says she believes it’s not setup to support survivors.  Fain has denied several requests by Q13 News to be interviewed on-camera.