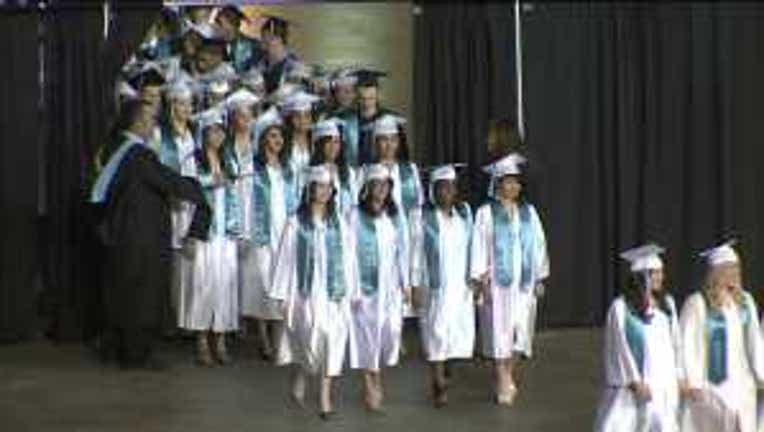 SEATTLE -- Graduating high school is a huge milestone in a child’s life, but in Washington, one in four kids will never receive their diploma.  Washington ranks 32nd in the nation, tied with states such as West Virginia and Utah for graduation rates.

The 76% graduation rate is the most recent statistic calculated by the state for the 2010-2011 school year.

In others, it's even worse.

At  Spanaway Lake High School for example, only 30% of seniors were eligible to graduate in the spring of 2011.

Guppy thinks there are a few reasons why.

“Local principals are not in control of their budgets so they can’t hire the best teachers.  It’s all controlled centrally. Also, only 60 cents of every education dollar reaches the classroom,” said Guppy.

When it comes to dollars and cents, districts across the state have been hit hard the past four years with deep budget cuts.

“When you’ve had cuts for ongoing years, you get to the point where there is no low-hanging fruit anymore; it’s every cut that comes along that really cuts to the bone,” said Chris Loftis, of the Kent School District.

In Kent, the district cut $13 million for the 2011-2012 school year and had to get rid of 100 staff members.  Now more cuts could be on the way in the form of federal dollars if Congress and the president can’t agree on a deficit-reduction page by Jan. 1.

If they don’t make a deal, and steep federal cuts take place, it would mean a loss of $49.6 million in education funding statewide for Title I and II programs for things such as free and reduced lunch, literacy programs and help for special needs students.

“Children are absolutely reliant on this money. The problem is $49 million is a drop in the bucket as far as Congress is concerned,” said Guppy.

State Schools Superintendent Randy Dorn thinks the situation could be even worse.

“If we go off the (federal) fiscal cliff, it’s going to be much more devastating than $49 million because the economy will tank and our budget will go in a deep recession like it did four years ago.  It wouldn’t be $49 million; it would be half a billion dollars and devastating to students in our state,” said Dorn.

The federal cuts could mean a loss of at least $2 million for the Kent School District. It amounts to 10% of school districts’ budgets, with 70% coming from the state and 20% from local levies.