SKAGIT COUNTY -- New surveillance video clearly shows the very beginning of the I-5 bridge collapse. Power to the camera went off as the bridge crumbled.

On Saturday, the National Transportation Safety Board confirmed that a truck carrying a wide load collided with the bridge.

NTSB Chairman, Debbie Hersman, said, "It's the opening of the bridge.  It's the first frame you encounter. The damage to U-5 is severe.”

Startling, new information reveals this collapse could have been much worse. The second section of the bridge is badly damaged.

Hersman said, "The first four frames of that span also show damage from the tractor trailers load as well.”

According to the NTSB, the semi with its load, measured 15 feet, nine inches tall, but the lowest clearance of the Skagit River Bridge is just 14 feet six inches tall. NTSB investigators spoke with the semi driver on Saturday, who is fully cooperating in the investigation.

"He described hearing a boom and feeling contact in the vehicle,” Hersman explained.

The 41 year-old driver, with over two decades of experience, pulled over after crossing the bridge and spoke with authorities. He claims he never heard from a pilot car driving in front of him about any clearance issue.

WSDOT spokesperson, Bart Treece, said, "We've got the green light to start working here and clearing some of the debris out here. We've got equipment on the way. We've got barges in the river they should be here tonight with some equipment and we'll go to work.”

WSDOT already has a $15 million dollar deal in place with Atkinson Construction. The goal is to come up with a quick fix to get traffic moving again, then decide on a long term plan. The department still doesn't know if this bridge should be salvaged or scrapped.

"We're going to inspect the bridge,” Treece said.  “That's part of figuring out and answering some of those questions we don't have answers to. So, we want to make sure we fully understand what needs to be repaired.” 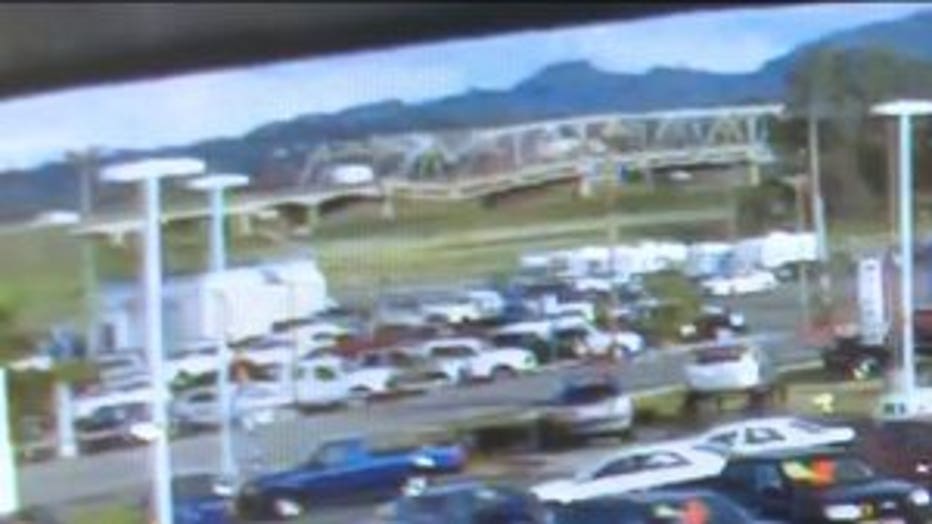