(CNN) -- You’ve probably heard this one before: Little guy gets too close to a trademark held by a big company. Big company threatens legal action. Little guy backs off. 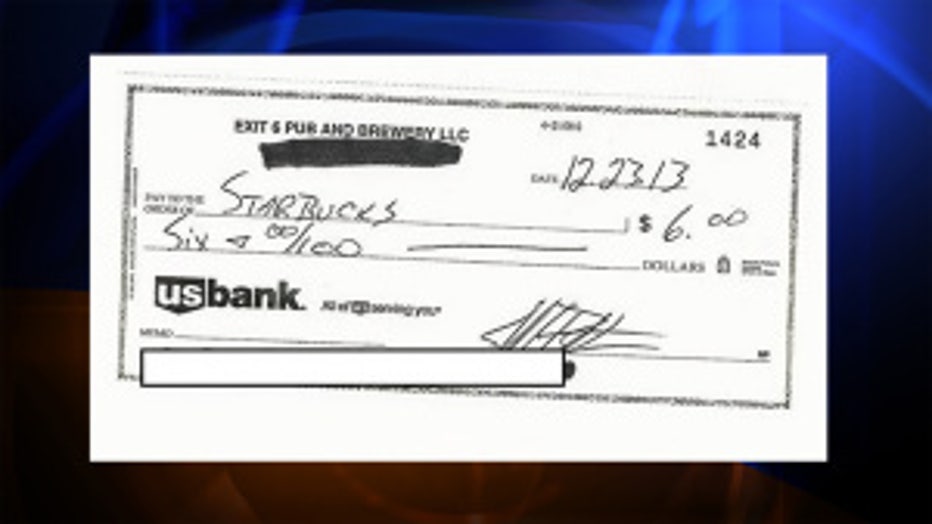 But have you heard the one where the small business owner responds to a cease and desist order from Starbucks with a satirical letter and a check for $6?

But we’re getting ahead of ourselves. Let’s start at the beginning.

Jeff Briton owns the Exit 6 Pub and Brewery in Cottleville, Missouri. He has for two and a half years. The place isn’t a fancy gastro pub, in fact, it doesn’t even have a kitchen.

It does one thing and does it well: serve craft beer seven days a week, starting at 4 p.m.

A beer is born

Last January, Briton mixed two of his creations together: A vanilla crème and a chocolate coffee ale.

The result, according to a customer, tasted a whole lot like a certain blended coffee ice beverage served at the more than 5,500 Starbucks locations worldwide.

The customer wrote about the creation on a beer website, Un Tapped, and called it a “Frappicino” — one letter off from the Starbucks trademarked name.

Last week, Briton received a letter from Starbucks’ lawyers, asking him to stop using the name.

“The FRAPPICINO mark only differs from Starbucks Coffee Co.’s FRAPPUCCINO mark by one letter,” the letter said, “and is phonetically identical.”

The bar’s use of the name would cause “confusion” among buyers, it added.

The message was clear: you violated our trademark. Stop.

But in the black and white legalese, Briton saw an opportunity.

“This huge law firm sends me this letter,” Briton told CNN on Monday night. “How many hours did that lawyer have to spend in sending that out?”

Briton says he reckons that Starbucks spent more in law firm billable hours than he made in the entire month of December.

In other words, Briton felt he had to respond. 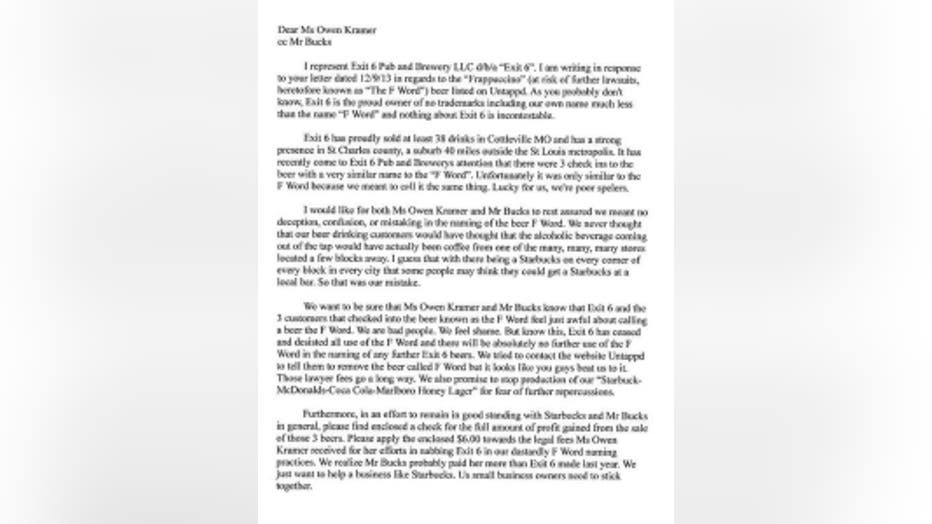 Addressing his response to the lawyer and “Mr. Bucks,” he referred to the offending beverage and trademark as “The F Word” so as to fend of further litigation risk.

“It has recently come to the Exit 6 Pub and Brewerys attention that there were 3 check ins to the beer with a very similar name to the “F Word”. Unfortunately it was only similar to the F Word because we meant to call it the same thing. Lucky for us, we’re poor spelers.”

“We just feel awful about calling a beer the F Word,” the letter went on. “We are bad people. We feel shame.”

And while Briton wrote that he would stop calling the beer “The F Word,” he also wanted to reassure Mr. Bucks that he and his customers meant no harm.

“I guess that with there being a Starbucks on every corner of every block in every city that some people may think they could get a Starbucks at a local bar,” he wrote. “So that was our mistake.”

Check in the mail

So, in an effort to “remain in good standings,” he included a check for the “full amount of profit gained” from sales of the offending brew.

Total number of beers sold: three. The check to Starbucks: $6.

People love stories about little guys standing up to corporations with big pockets. And soon, Briton’s story was splashed all over mainstream media.

“Even someone very inebriated should not find coffee and beer to be confusingly similar,” wrote Mike Sandburg on the bar’s Facebook page.

Added Mindy Schildroth: “I think you should name your next beer Six Bucks!”

And Martin Lawler said he’d fly from Oakhurst, California, just to order the beer. “And I don’t like stouts!!”

Laurel Harper, a manager for Starbucks communication, told CNN the request her company sent to Briton was “respectful.”

“Just like many business, trademark law requires all companies, including Starbucks, to consistently protect its brand,” she said via e-mail. “We always prefer to resolve trademark disputes informally and amicably whenever possible, and we appreciate Exit 6 Pub and Brewery respecting our request to avoid confusion among customers.”

Harper told CNN she hadn’t heard about Briton’s check. She said Starbucks wouldn’t be cashing it.

The experience prompted Briton to stop producing another beer, he said tongue planted firmly in cheek: