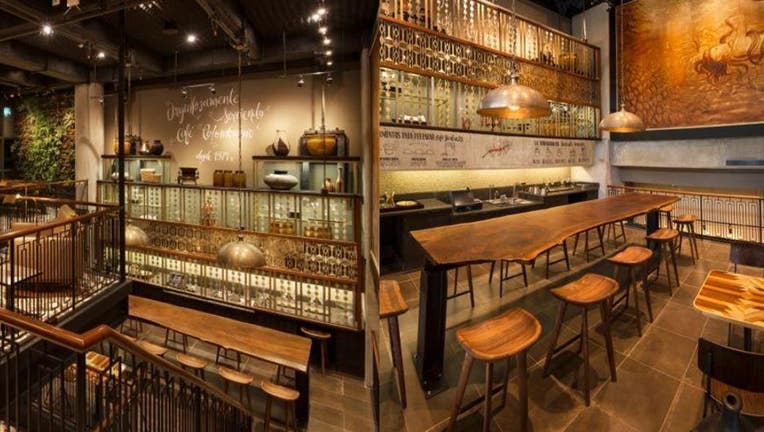 NEW YORK (CNNMoney) -- Starbucks opened its first store in Colombia on Wednesday, which means that after 43 years, the company will finally sell 100% locally-produced coffee.

"We're only serving Colombia coffee in the store; we've never done anything like that before," said Starbucks Chief Executive Officer Howard Schultz, speaking by phone from Bogota with CNN's Poppy Harlow.

Over the next five years, Starbucks plans to open 50 stores and hire 1,000 workers in Colombia.

Seattle-based Starbucks has been buying coffee from Colombia since its debut in 1971. The company has more than 20,000 stores in 65 countries.

But it will be hard for the chain to beak into this market, which is dominated by national coffee producer Juan Valdez Café.

"It's a difficult market to crack because of the entrenched issue of Juan Valdez and we wanted to come here the right way," said Schultz. "I think we need to come here with humility and respect. The success we've had around the world does not mean we are going to be successful here."

Regarding their main competitor, he said, "I think we'll coexist with Juan Valdez. Our intent is not to overtake them, but again to create a distinct experience and I think we'll do that."

Schultz also explained that Starbucks recently raised its prices due to rising labor costs and price hikes at competitors.

"We held the line as long as we could," he said.

Schultz also expressed concern that global warming could affect his business -- and all businesses -- going forward.

"Make no mistake: Over the long term if there are not significant changes in the way global business addresses these issues -- every business, coffee or otherwise, is going to be affected," he said.

Schultz also discussed the issue of immigration reform, saying the process has unraveled since Rep. Eric Cantor, a Republican from Virginia, lost his bid for reelection in the primaries to Tea Party candidate David Brat.

"We need an immigration bill," he said. "Democrats and Republicans need to come together and recognize that we need to represent the country and come together to do what's right."

Starbucks is opening its Bogota store as part of a joint venture with two Latin American companies: Alsea, which runs about 520 Starbucks stores in Mexico, Argentina and Chile, and Colombian food company Grupo Nutresa.