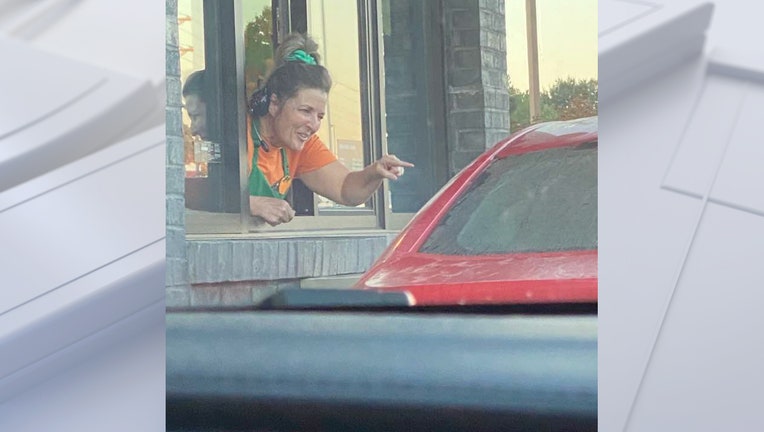 Tanya Hinsley said she snapped this photo right after the Starbucks barista prayed with a customer. (Credit: Tanya Hinsley)

JONESBORO, Ark. - Waiting in the drive-thru line can be a bit tedious, but Tanya Hinsley said she captured a moment that made it all worth it.

The Jonesboro, Arkansas, resident said she was recently at a local Starbucks with her son who had just received his driving permit.

Hinsley said she was waiting in line when Carrie, the Starbucks employee, started praying with the customer at the front of the line.

"My son and I were having a discussion about how we loved that she stopped what she is doing and was bold in her faith and cared enough to pray with someone," Hinsley continued. "This is when I decided to snap a picture but caught the very end of the prayer and decided to share this positive moment in hopes of brightening someone’s day."

Hinsley said she’s glad her son witnessed the moment as he is also devoted to his faith and praying in public may not seem "cool" to other teenagers.

Hinsley posted the picture on Facebook which ended up getting hundreds of likes, shares and comments.

"I was overwhelmed by the end of the day when I seen [saw] how many times the post had been shared, and we loved reading the stories of all of the other people she [Carrie] has blessed just by being so kind, praying for others, and simply being a light for Jesus!" Hinsley added.

RELATED: Poll: 23% say they have prayed for the outcome of a professional sports event

Hinsley also said she met with the Starbucks employee since the photo went viral.

"Her heart is full from the kind words, and I think she was blown away," Hinsley continued.

"This act of kindness and boldness in faith given out to others daily by people like Carrie, gives me hope and reminds myself and hopefully others that being kind and praying for someone doesn’t cost anything," she said. "We never know when something we say can help save someone…literally."

FOX Television Stations has reached out to Starbucks for comment.