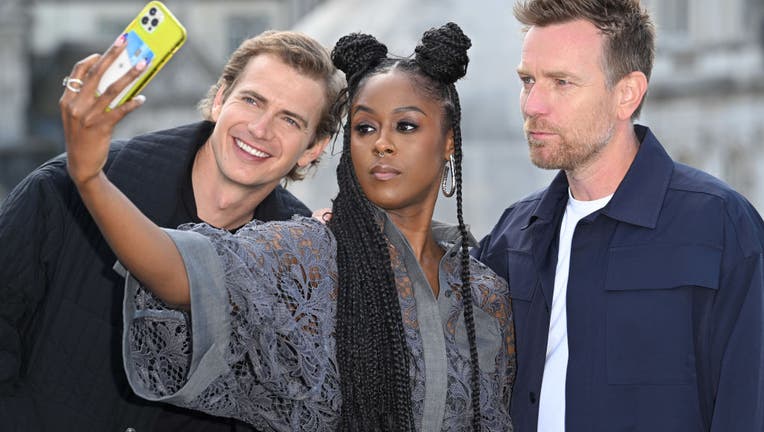 L-R) Hayden Christensen, Moses Ingram and Ewan McGregor attend the "Obi-Wan Kenobi" photocall at the Corinthia Hotel London on May 12, 2022 in London, England.

"We are proud to welcome Moses Ingram to the Star Wars family and excited for Reva’s story to unfold. If anyone intends to make her feel in any way unwelcome, we have only one thing to say: we resist," stated the Star Wars social media account.

"There are more than 20 million sentient species in the Star Wars galaxy, don’t choose to be a racist," the account continued.

Ewan McGregor, who plays Obi-Wan Kenobi spoke out against the racist messages being sent to Ingram.

McGregor posted a video to Twitter in which he said the messages sent to Ingram broke his heart.

"Moses is a brilliant actor, she’s a brilliant woman and she’s absolutely amazing in this series, I just want to say as the leading actor in the series, as the executive producer on the series, that we stand with Moses. We love Moses, and if you’re sending her bullying messages, you’re no Star Wars fan in my mind. There’s no place for racism in this world," McGregor added.

Ingram, 29, revealed on her Instagram Stories screenshots of various hate messages she received since debuting in the highly anticipated new Disney+ series.

Ingram says in a separate post to her Instagram Stories that the screenshots she shared were just some of "hundreds" of racist messages she’s received on social media since the new series debuted on May 27.

"You won’t be loved or remembered for this acting role," one person wrote.

"You’re a diversity hire and you won’t be loved or remembered for this acting role," wrote another hateful comment.

Ingram posted several other screen grabs of other users using the n-word.

"I also see those of you out there who put on a cape for me, and that really does mean the world to me because there’s nothing anybody can do about this. There’s nothing anybody can do to stop this hate," she added. "But I think the thing that bothers me is this feeling that I’ve had inside of myself, which no one has told me, but this feeling of I just have to shut up and take it; I just have to grin and bear it and I’m not built like that."

Ingram previously told The Independent earlier this month that Lucasfilm had warned her that she could potentially be a victim of hurtful racist epithets.

But others throughout the industry have spoken out to support Ingram including Anson Mount, star of the newest "Star Trek" show, "Star Trek: Strange New Worlds."

"This is Moses Ingram. She is a singular talent and a recent addition to the @starwars universe. She has also been targeted by racists pretending to be fans because her mere existence threatens a skewed, dystopian fantasy that selectively omits the likes of @therealbillydee and others. We, the Trek Family, have her back," Mount wrote on his Instagram page.

"There's no place for bigotry in any universe," wrote the official account for Star Trek on Paramount+.