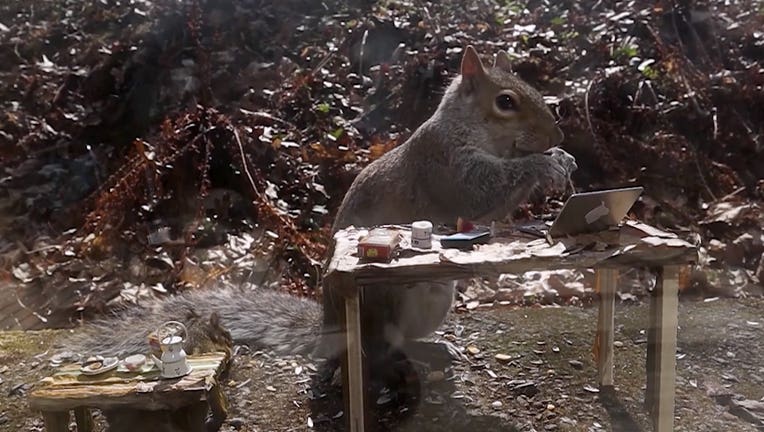 PITTSBURGH, Penn. - It looks like humans aren’t the only ones working from home.

Since beginning her visual project in February, Barron has been staging clips of the furry critters participating in human activities such as reading, drinking tea and baking.

In this particular video, the squirrel is participating in an activity that much of the world is familiar with: working from home.

The critter is presented with an adorably tiny laptop that opens up to reveal food while a chipmunk crawls underneath another small table bearing a miniature tea set.

“For the span of this project, I have exhausted an eight-pound bag of squirrel food, two bags of walnuts, 4-5 apples, some carrots here and there (trying to offer healthier options as they are getting chunky), a jar of Jif peanut butter and half a jar of fancy Costco peanut butter (which they like significantly less than the Jif),” Barron revealed.

“I have also accumulated a cast of eight ‘repeating visitor’ squirrels and in the last week an additional five squirrels just came out of the nest,” according to Barron.

She continues to post videos of her project on Instagram where there are a number of adorable videos that feature her furry friends using delightful miniature objects.