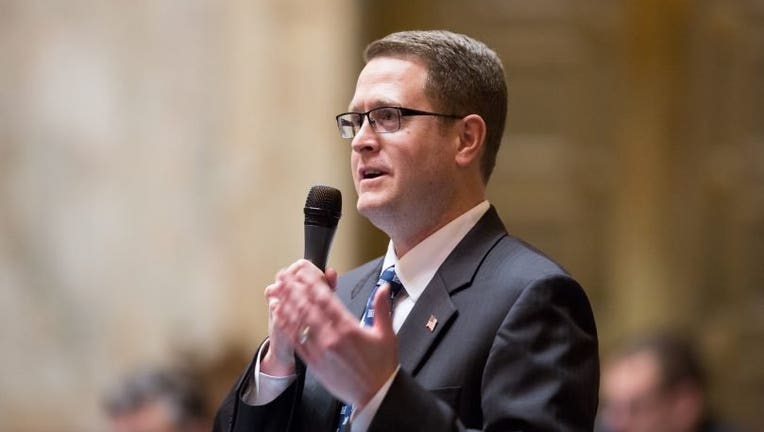 SPOKANE, Wash. (AP) — Washington state's liberal reputation is well-known, but voters in a conservative legislative district have re-elected Republican lawyer Matt Shea to the Legislature six times — as he has raged against Communists and atheists he thinks will destroy the U.S. and lobbied for a breakaway 51st "Liberty State."

The Army veteran hosts a weekly "Patriot Radio" show on the American Christian Network and on Facebook Live in 2017 complimented members of Team Rugged, a group that one member said provides special forces type gun training for young men so they can "be effective in Christian warfare."

Shea represents the suburb of Spokane Valley, and last year lost a state House leadership position after acknowledging he distributed a manifesto linked to the Christian Identity movement. It calls for killing non-Christian males unless they follow fundamentalist biblical law.

Now Shea faces a bigger challenge, with Republican and Democratic politicians alike demanding his resignation, as private investigators hired by the Democrat-dominated Legislature investigate allegations he and three others discussed spying on progressives in Spokane, a liberal outpost in deeply conservative eastern Washington state.

One of the men Shea communicated with suggested "hoisting communists up flag poles," according to Signal encrypted chat messages published last month by Britain's The Guardian newspaper. The newspaper also reported that Shea volunteered to help with surveillance, naming as potential targets a college professor and an organizer for the liberal group Indivisible.

In another report, The Spokesman-Review newspaper of Spokane cited emails and other documents alleging Shea compiled dossiers on liberal Spokane City Council members, sought to purchase GPS trackers, maintained a list of suspected informants and wanted to "turn back the tide" of Islam in the U.S.

The reports prompted Spokane County Sheriff Ozzie Knezovich, a Republican who has turned over documents about Shea to the FBI, to label Shea as too radical for the party and to lobby Republican lawmakers to boot him out of the Legislature.

"Republicans don't believe in the kind of stuff Matt Shea is doing," Knezovich said. "Stop allowing Matt Shea to bring dishonor to the state of Washington."

Spokane's mayor and police chief have called for Shea's resignation, with Chief Craig Meidl saying Shea's avowed dedication to the Constitution is ludicrous because "our founding fathers warned against despotism."

"Rep. Shea seems to have lost these founding principles somewhere along the way," Meidl said.

Shea did not respond to repeated messages seeking an interview on the spying allegations and calls for his resignation. In the past he has called reporters "dirty, godless and hateful."

After the two newspapers published the stories, he said on Facebook: "Of course I have done background checks to protect my family and my community."

Shea, 45, graduated from high school in the northwestern city of Bellingham, Washington, and his legislative web page says his ancestors operated one of the state's first stage coaches.

He was in the ROTC at Gonzaga University in Spokane, graduated as a commissioned officer and served as an Army platoon leader in Bosnia. He also was a company commander in Iraq, reached the rank of captain and earned a Bronze Star medal, according to his web page and LinkedIn profile.

Shea got his law degree from Gonzaga in 2006 and in 2008 was elected to represent Spokane Valley. He calls himself a "Constitutional conservative and pro-liberty legislator" with a vision "to see a God-honoring Constitutional Republic restored." He is also a firm gun-rights advocate and opposes abortion.

Shea in 2016 visited the Malheur National Wildlife Refuge in support of its armed occupation led by two sons of Nevada rancher Cliven Bundy and also went to Bundy's Nevada ranch in 2014 during the Bundy-led standoff with FBI agents in a dispute over grazing rights.

It also said in its Hatewatch publication that Shea "is a celebrity within the anti-government-inspired American Redoubt movement and for years has taken to propagating anti-Muslim bigotry."

The American Redoubt movement created by survivalist James Wesley Rawls designates eastern Washington, eastern Oregon and Idaho and Montana and Wyoming as a region for Americans to retreat to in the aftermath of civil war and government collapse.

Shea is popular in his district and was re-elected last year with 58% of the vote by residents who reject what they feel are efforts by liberals in Seattle to control the state.

Among his backers is Glenn Proelss, who said he isn't bothered by the surveillance allegations involving Shea.

Proelss, 63 and retired, said he has known shady people during his lifetime and that he assumes Shea has as well. That doesn't make Shea unfit for office, Proelss said, adding that Shea has won his repeated terms because he's an effective lawmaker who represents his district.

But Shea appears to be losing corporate support. The Seattle Times reported this month that his donors including AT&T, BSNF Railway and the Washington Association of Realtors have asked him to return donations. Other companies, including Boeing Co., told the newspaper they will contribute no more to Shea's political campaigns.

The investigators looking into Shea are expected to deliver a preliminary report on Sept. 30 and a final report by Dec. 1. If legislators expel Shea, he would be the first Washington state lawmaker ousted since 1933, when a legislator was accused of statutory rape.

House Republican Leader J.T. Wilcox said in a statement that he expects "this investigation to be comprehensive and provide a more complete picture of the allegations that have appeared in news stories to date."

He added that he is "deeply concerned" about the surveillance allegations and "that hate — in any form — is contrary to my values and our caucus as a whole."