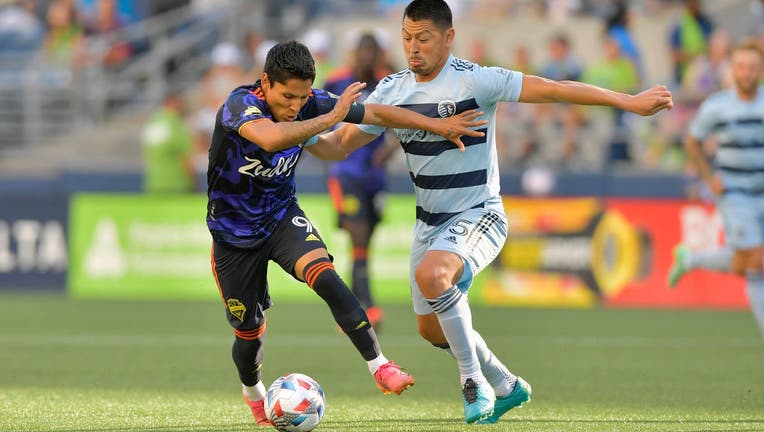 SEATTLE - Johnny Russell and Daniel Salloi scored in the first half, Cameron Duke added his first MLS goal in the second and Sporting Kansas City handed Seattle its first home loss of the season, beating the Sounders 3-1 on Sunday night.

The matchup of the top two teams in the Western Conference went to the side trying to chase down the leaders. Kansas City (9-3-3) pulled within two points of Seattle (9-2-5) in the West standings and has a game in hand. The Sounders also dropped a point behind New England for the overall MLS lead.

"They’re obviously without a lot of players, we’re out without a lot of players," said Kansas City coach Peter Vermes, who watched the match from home after testing positive for COVID-19. "I think right now everybody’s kind of going through the grind of the summertime, and I think we’re just fortunate enough to put together a good effort which resulted in a good result."

Russell gave Kansas City the early advantage curling a free kick past Seattle goalkeeper Stefan Cleveland in the 31st minute. Russell drew the free kick just outside the penalty area and his shot appeared to catch Seattle by surprise as it was still getting its positioning settled.

Salloi scored his ninth of the season shortly before halftime on a counter after a careless turnover by Seattle’s Kelyn Rowe.

And Duke provided the capper in the 72nd minute after Seattle had pulled to 2-1 and missed several chances to draw even. Duke barely stayed onside and volleyed his first goal off a pass from Graham Zusi.

Kansas City is unbeaten in its last five with wins in four of those matches.

"You need to give them the respect, they’re a good team good team, but we weren’t going to sit back and let them come at us and dictate the game," Russell said.

Seattle set an MLS record going unbeaten in its first 13 games to start the season but has dropped two of its past three. The Sounders appeared lethargic and tired against Kansas City, playing their third game in seven days after road games at Minnesota United and Austin FC.

Seattle started a MLS-record five teenagers in its 1-0 victory over Austin on Thursday night and while a few more regulars were back in the lineup against Kansas City it was still a disjointed effort.

"We had talked internally about this being a trap game," Seattle coach Brian Schmetzer said. "You go into this game against an opponent that is right behind you in the standings, they were up for the game. And the emotional high of what we accomplished in Austin it was hard for the team, it seemed like, to get emotionally ready for this game."

Fredy Montero gave Seattle a boost when he scored early in the second half. Montero nearly had a spectacular bicycle kick goal in the first half only to see it get shoved aside by Kansas City goalkeeper Tim Melia.

Montero scored in the 51st minute getting a left-footed shot of a scramble in the penalty area past Melia. The Sounders nearly pulled even moments later when Raul Ruidiaz chipped attempt banged off the post after Melia appeared to get the slightest deflection.

Melia also denied Ruidiaz at the back post in stoppage time.