FUGITIVE CAPTURED April 21, 2013 -- Just days after being featured on WMW, Crime Stoppers of the Inland Northwest says Joel Ballard was arrested by Spokane police. FUGITIVE WANTED IN SPOKANE COUNTY April 19, 2013 -- Officers say he's a wanted skinhead who gets high on a drug we’ve never even heard of before. It's called "Witches Gaze". It's made from bread mold, and officers say it makes you hallucinate -- and potentially violent. Not sure if he's high on it in his main mug shot -- but he's definitely got a dangerous looking gaze going on. 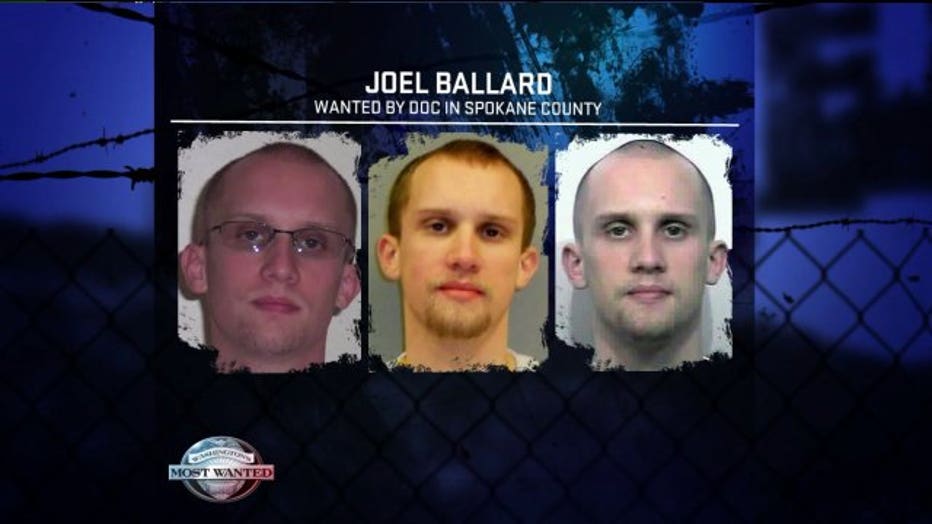 His name is Joel Ballard, and he looks much more normal in his older photos. Either way, he's a high-violent offender who's wanted by the Department of Corrections for escape in Spokane County, where the terror he unleashed on his own mom shows how drugs -- and not just "witches gaze" -- make this guy dangerous. "Joel's mom called 911, because he was high on meth, and was threatening to shoot and kill people,” says DOC Ofc. Christina Lacy. “She was very afraid because earlier that month, she actually saw Joel with a handgun. His brother actually physically saw him using meth, so when officers arrived, they went down to Joel's room, and immediately place him under arrest. They also recovered a baggie of meth.” Spokane detectives tell us Ballard's been in and out of custody for over a decade now, busted for multiple burglaries, running from cops -- even money laundering. Here are the details on JOEL BALLARD: