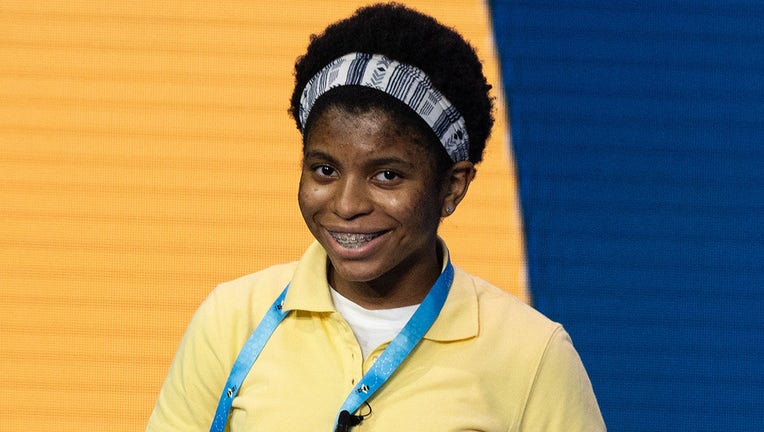 National Spelling Bee champion Zaila Avant-garde is a basketball prodigy who has appeared in a commercial with Stephen Curry and set three Guinness world records for dribbling multiple balls simultaneously.

She is a basketball prodigy who has appeared in a commercial with Stephen Curry and set three Guinness world records for dribbling multiple balls simultaneously.

The 14-year-old from Harvey, Louisiana has more than 12,000 Instagram followers — where videos of her dazzling skills have won praise from musician Michael Franti, among others — and she hopes to attend Harvard, play in the WNBA and possibly coach one day in the NBA, if she doesn’t go to work for NASA.

"Basketball, I’m not just playing it. I’m really trying to go somewhere with it. Basketball is what I do," Avant-garde said. "Spelling is really a side thing I do. It’s like a little hors d’ouevre. But basketball’s like the main dish."

Of course, Avant-garde brought the same competitive fire to spelling that she shows on the basketball court.

She also won last year’s Kaplan-Hexco Online Spelling Bee — one of several bees that emerged during the pandemic after Scripps canceled last year — and used the $10,000 first prize to pay for study materials and $130-an-hour sessions with a private tutor, 2015 Scripps runner-up Cole Shafer-Ray.

The time commitment required to master roots, language patterns and definitions is what keeps many top spellers from seriously pursuing sports or other activities. But Avant-garde, who is home-schooled, claims to have it figured out.

"For spelling, I usually try to do about 13,000 words (per day), and that usually takes about seven hours or so," she said. "We don’t let it go way too overboard, of course. I’ve got school and basketball to do."

"I have my suspicions. I don’t know. I have some suspicions that maybe it’s a bit less than what some spellers do," she said.

Declared the champion Friday, Avant-garde jumped and twirled with joy, only flinching in surprise when confetti was shot onto the stage.

"I was pretty relaxed on the subject of Murraya and pretty much any other word I got," she said.

Avant-garde said she hopes to inspire other African-Americans who might not understand the appeal of spelling or can’t afford to pursue it.

The bee has been rightly celebrated as a showcase for students of color — a speller of South Asian descent has been the champion or co-champion of every bee since 2008 — but Avant-garde is not the first speller to point out issues with economic diversity.

Indian-Americans are the wealthiest U.S. ethnic group, according to Census data, and Indian professionals who immigrate to the U.S. have access to a network of bees and other academic competitions targeting their community.

"It’s really important to me that a student anywhere in the country or a parent or a sponsor watches the bee on (Thursday) and says, ‘I see myself there, I want to be there and there is a clear pathway to try to get there,’" Durnil said.