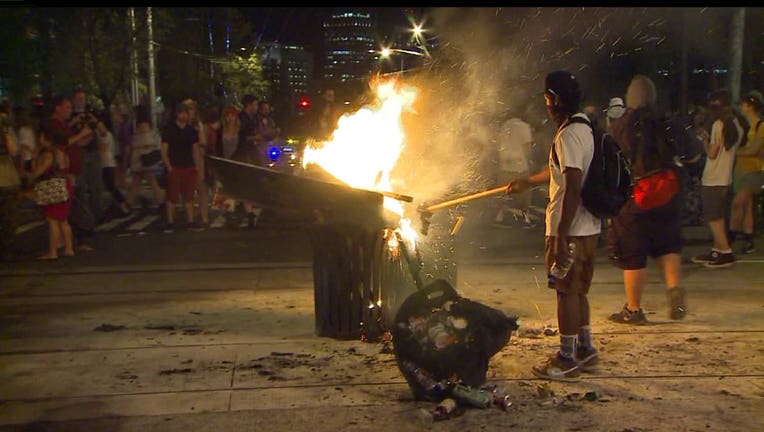 Protesters started a trash can fire in the middle of Broadway Avenue in Seattle Thursday night. (Photo: KCPQ-TV)

SEATTLE -- Seattle Police have been prepping for more than two months on how to handle May Day protests that turn violent.

“The bottom line is that we had some choices to make. Either we could have gone hands-on and created a very out of control situation or we could do what we did last night,” interim Police Chief Harry Bailey said at a news conference Friday.

Seattle police say they had no choice Thursday but to follow and contain the large crowd of un-permitted protesters who took over and marched down any street at will, because city policy allows marches as long as it doesn’t put people or property at risk.

Bike cops rode along both sides of the growing crowd as the protesters marched from Capitol Hill through Belltown and back. Those bicycle cops then stepped in when needed, like at 6th and Battery when police made the first of 10 arrests and deployed pepper spray. Near there, a group used skateboards to damage a BMW.

After dark on Capitol Hill, the group set a fire in a trash can in the middle of Broadway Avenue.

“Once we saw the fire was getting larger and you could see it going over the head of the crowd, we planned the tactics to go in and put out the fire,” police Capt. Chris Fowler said.

Police knew they didn’t want the crowd to go back downtown, fearing property damage, so officers kept them blocked in an intersection until well after midnight.

“It seemed relatively peaceful and contained so it seemed like the police were letting folks have their fun and probably closed it down before it got too crazy,” said Wacarra Yeomans.

People who live and work in Capitol Hill were surprised it didn’t get more out of hand. Some business owners were expecting to see smashed windows when they arrived at work Friday. Downtown retailers still paid a price for May Day.

“We have some questions and want to sit down with the city and ask what can we do about these un-permitted marches? That (march) went on for six hours and it cost us millions of dollars. Is there something we can do better about that?” asked Downtown Seattle Association President Kate Joncas.