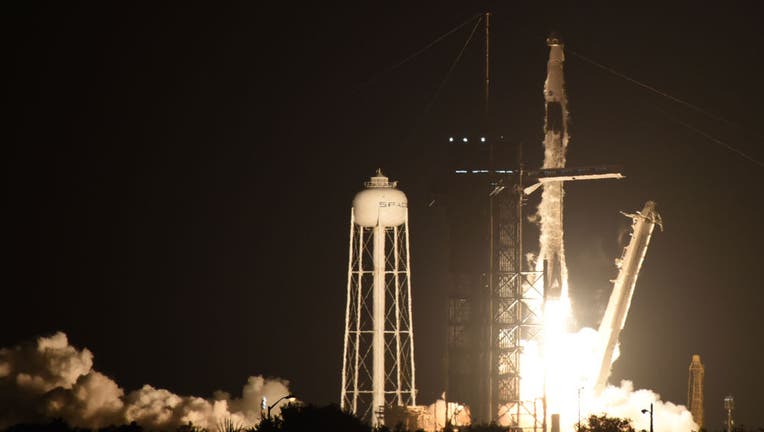 CAPE CANAVERAL, FL, USA - APRIL 27: A SpaceX Falcon 9 rocket with a Crew Dragon spacecraft named Freedom launches from pad 39A at the Kennedy Space Center at 3:52 a.m. EDT on April 27, 2022 in Cape Canaveral, Florida. The NASA SpaceX Crew-4 mission i

Capping off a busy week launching and returning eight humans from space, SpaceX launched another batch of internet satellites on Friday.

A Falcon 9 launched at 5:27 p.m. ET from Cape Canaveral Space Force Station Launch Complex 40. Inside the rocket nose cone were 53 Starlink satellites that will increase SpaceX's constellation to provide global internet. The company confirmed all satellites were deployed in low-Earth orbit shortly after liftoff.

The booster used for Friday's mission also launched the Axiom-1 private crew on April 8 and has been used for five other missions. It was also used in September for the Inspiration4 mission. During that spaceflight, four private space explorers launched in a Dragon capsule and spent three days in orbit.

After separation, the booster returned to Earth, landing on the Just Read the Instructions droneship in the Atlantic Ocean. This marked the 117th booster landing for SpaceX.

It was a beautiful day on Florida's Space Coast for a launch, with temperatures in the mid-70s, but the cloud cover providing shade to beachgoers can be a problem for rocket launches.

Cumulus clouds, known for their cotton ball shape, are problematic for rockets. Under the right conditions, a rocket launch could trigger lightning if it launches near one of these fluffy clouds with an electric charge.

If cumulus clouds are near the launch site, weather officers will look at the distance, timing and surface electric field before deciding its "Go" to launch.

SpaceX has launched more than 2,000 internet satellites into orbit with plans to add thousands more. The last Starlink launch was April 21.

April has been busy for the private company. Friday's liftoff will mark the sixth this month.

In the past week, SpaceX launched the NASA Crew-4 mission with four astronauts to the International Space Station and brought home four private astronauts from the ISS as part of the Axiom-1 mission.