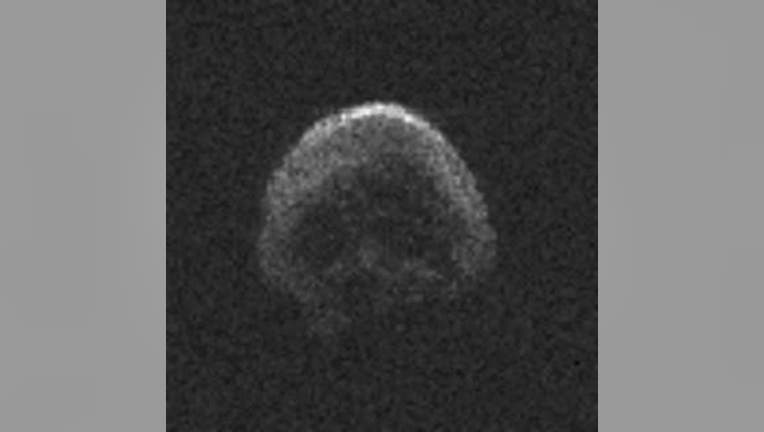 This image of asteroid 2015 TB145, a dead comet, was generated using radar data collected by the National Science Foundation's 1,000-foot (305-meter) Arecibo Observatory in Puerto Rico. The radar image was taken on Oct. 30, 2015, and the image resolu

HOUSTON -- NASA said Friday that a huge rock that will fly past Earth on Halloween is most likely a dead comet that, fittingly, bears an eerie resemblance to a skull.

Scientists looking at asteroid 2015 TB145 at NASA's Infrared Telescope Facility in Hawaii have determined that the object is more than like a dead comet that has "shed its volatiles after numerous passes by the sun," NASA said.

Radar images from the National Science Foundation's Arecibo Observatory in Puerto Rico indicate the object is spherical in shape and about 2,000 feet in diameter.

"We found that the object reflects about six percent of the light it receives from the sun," said Vishnu Reddy, a research scientist at the Planetary Science Institute, Tucson, Arizona. "That is similar to fresh asphalt, and while here on Earth we think that is pretty dark, it is brighter than a typical comet which reflects only 3 to 5 percent of the light. That suggests it could be cometary in origin –- but as there is no coma evident, the conclusion is it is a dead comet.”

Radar images generated by the Arecibo team are available at: