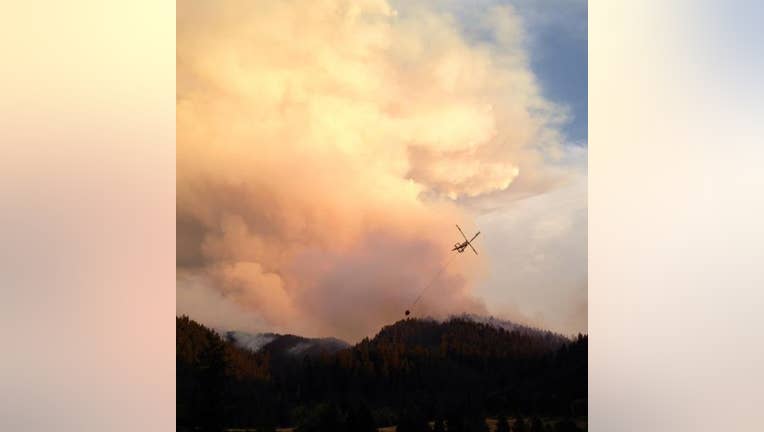 CANYONVILLE, Ore. (AP) — A fire burning in forestland in southwest Oregon has spread to more than 23 square miles, according to more accurate mapping of the blaze.

Although the fire was still growing Sunday, fire team spokesman Dave Wells says they were not expecting explosive growth. Wells says the day is overcast and misty rain has been falling.

The Stouts Creek Fire about 16 miles east of Canyonville in Douglas County doubled in size from Friday to Sunday.

Wells says a total of 264 structures are threatened but only about half are homes.

A wildfire growing rapidly in forestland in southwest Oregon had spread to nearly 17 square miles Sunday, keeping about 35 families from their homes.

"It's just tough keeping up with it. It's so dry out here," said Dave Wells, a spokesman for the fire team from the Oregon Department of Forestry and the state fire marshal.

The Stouts Creek Fire about 16 miles east of Canyonville in Douglas County nearly doubled in size from Friday to Sunday, officials said.

A total of 264 structures are threatened with 100 families being told to prepare to leave, in addition to the three dozen already evacuated, Wells said.

The Stouts Creek Fire began Thursday in the unincorporated community of Milo, which is east of Canyonville. Its cause is under investigation.

The weather forecast called for a chance of rain Sunday, which could help firefighters, but the incident commander has called it a "big tough fire" that will take a while to control, Wells said.

More than 1000 people are fighting the fire, which was about 3 percent contained Sunday morning.

Gov. Kate Brown has invoked the Emergency Conflagration Act so resources from around the state can be used to protect homes.

Nearly 200 people attended an information meeting about the fire in a community church Saturday evening. Another community meeting was scheduled for Sunday evening.