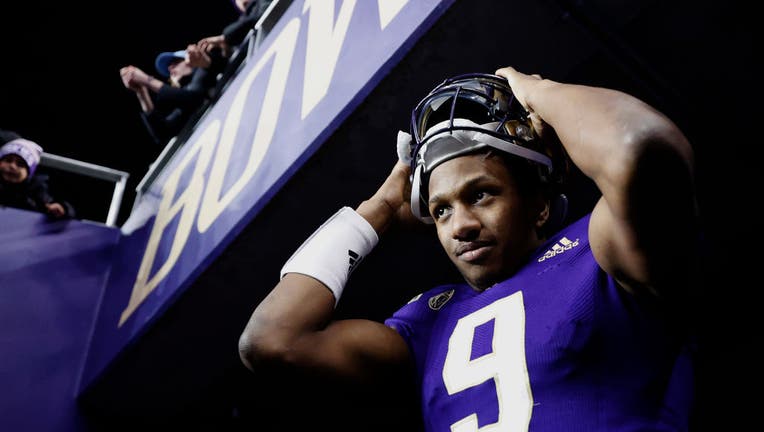 Southwest Airlines passengers are not having a good time this week, and UW Quarterback Michael Penix Jr.’s mom is one of many who had their flights canceled.

The No. 12 University of Washington Huskies will face No. 21 Texas in the Valero Alamo Bowl on Thursday. Penix Jr.’s family was planning to fly from Florida to Texas with Southwest Airlines, but now they’re in for quite the journey: a 17-hour road trip to see Michael play.

Mrs. Penix posted a photo of herself and her family – all wearing purple and gold – inside their car on Twitter this morning. Her caption: "Thanks to @SouthwestAir for canceling my flight to see my son in the @valeroalamobowl. They need to do better. That won’t stop us."

Additionally, she added, "They (Southwest Airlines) owe us some $$$." This is a common frustration shared by many Americans who recently had their Southwest flights canceled.

Travelers who counted on Southwest Airlines to get them home suffered another wave of canceled flights, and pressure grew on the federal government to help customers get reimbursed for unexpected expenses they incurred because of the airline’s meltdown.

Exhausted Southwest travelers tried finding seats on other airlines or renting cars to get to their destination, but many remained stranded. The airline’s CEO said it could be next week before the flight schedule returns to normal.

Faced with a life-altering choice, Washington’s Michael Penix Jr. opted to stay put. That made the Huskies’ quarterback one of the top players to watch this bowl season.

The nation’s leading passer chose not to leave for the NFL after the regular season and will lead the No. 12 Washington (10-2) against No. 21 Texas (8-4) on Thursday night in the Alamo Bowl.

It’s easy to see why.

Penix has thrown for 4,354 yards and 29 touchdowns in his one season since transferring from Indiana. The Huskies are on a six-game win streak heading into their first bowl since 2019. Another win and another big game from Penix likely sets up the quarterback and the Washington program for a lot of buzz heading into 2023.

"We’re excited about the future. It’s certainly got our momentum going for next year," DeBoer said. "But we’ve still got work to do this year. We want to close out this season and try to get that 11th win."

Texas made key strides in coach Steve Sarkisian’s second season. After a 5-7 finish in 2021 that included the longest losing streak in 65 years, the Longhorns finished third in the Big 12 and were in the mix for a berth in the conference championship game in late November.

Unlike Washington, Texas has seen an exodus of several top players before the bowl game.

Bijan Robinson, who led the Big 12 in rushing with 1,508 yards and 18 touchdowns, opted out of the bowl game to get ready for the NFL. So did the Longhorns’ second-leading rusher, Roschon Johnson, and linebacker DeMarvion Overshown, who tied for the team lead with 10 tackles for losses and also had four sacks.

Missing the top to backs could put more pressure on first-year quarterback Quinn Ewers, who struggled even while Texas finished the regular season with three wins in its last four games.

Ewers passed for under 200 yards in each of those games as Robinson and Johnson carried the load.

This has been an up-and-down season for a quarterback who skipped his senior season of high school, signed with Ohio State, then bolted to Texas last spring. An early clavicle injury knocked him out of a few games.

Ewers has passed for 1,808 yards and 14 touchdowns, but has just one TD pass the last three games. If he struggles again, it will only intensify fan expectation that incoming freshman Arch Manning will challenge him to be the starter in 2023.

Without Robinson and Johnson, Texas will go deep into its depth chart at running back. Junior Keilan Robinson may be the fastest Longhorn, but he’s mostly made his mark on special teams. Freshman Jonathan Brooks has played mostly in mop-up time. Those two have a total of 41 carries for 252 yards.

"You never like losing a few of your better players like that, but that’s why you recruit, that’s why you have a deep roster," Sarkisian said. "So that when your number’s called, you can step up and play well."

The Huskies have Penix back next season and they could have the majority of his top pass catchers, too.

Jalen McMillan, who led Washington with 71 receptions and eight touchdowns, has said he intends to return next season. Rome Odunze, who had 70 catches and seven touchdowns, seems to be leaning toward returning. The same goes for No. 3 pass catcher Ja’Lynn Polk, who had 38 catches and six touchdowns. McMillan and Odunze both topped 1,000 yards receiving and Polk averaged more than 17 yards per reception.

That trio will be facing a Longhorns secondary that allowed only 16 passing touchdowns, the least in the Big 12.

It will likely feel very much like home game for Texas. The Longhorns are playing just a 75-mile drive from their campus in Austin and their fans have a history of packing the Alamodome. Texas will be playing in the Alamo Bowl for second time in three years and the fifth time since 2012.

This will be the second time that Sarkisian coaches against the team he led from 2009-13. Sarkisian went 34-29 in his five seasons in Seattle. The Huskies were winless the season before Sarkisian arrived, and while they went to a bowl game in four of his five seasons, could never get climb to the top of the Pac-12 standings.

One of those bowl games was the 2011 Alamo Bowl, when Washington lost 67-56 to Baylor in what still ranks as the highest-scoring non-overtime bowl game in history.

Sarkisian left for the head job at USC after the 2013 season and faced off with Washington on Oct. 8, 2015 in Los Angeles, a game the Huskies pulled out 17-12. It dropped USC to 3-2 on the season and Sarkisian was fired a few days later.

The Associated Press Contributed to this article