(CNN) -- The ex-boyfriend of American exchange student Amanda Knox says he has returned to Italy to fight his new murder conviction in the death of Knox's onetime roommate, Meredith Kercher.

In a CNN interview Monday evening, Raffaele Sollecito said he and his current girlfriend were in neighboring Austria, preparing to celebrate what he had expected to be his exoneration by an Italian court. Instead, that court found Knox and Sollecito guilty for a second time last week, sentencing him to 25 years. 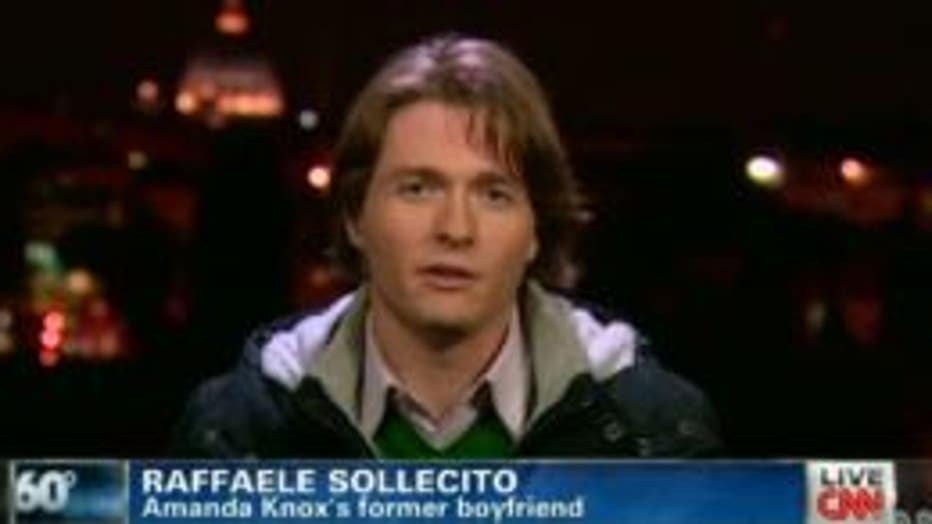 Knox, who returned to the United States after her 2009 conviction was overturned, said last week that she "will never go willingly" back to Italy. But Sollecito said he came back "as soon as I understood the verdict."

"I'm trying to be as positive as possible in a situation like this," he said. "It's very traumatic, the situation here now. But on the other side, I still have to fight. I have chosen to be here and to fight against this ordeal."

Italian police said Sollecito was stopped in the northern Italian town of Udine, near the border with Austria and Slovenia.

In an interview on CNN's "Anderson Cooper 360," Sollecito said he thought his relationship with Knox hurt him.

"Why do they convict me?" he said. "Why do put me on the corner and say that I'm guilty just because in their minds I have to be guilty because I was her boyfriend. It doesn't make any sense to me."

Kercher, 21, of Great Britain, was found stabbed to death in 2007 in the house she shared with Knox in Perugia, where both women were exchange students. Prosecutors said Kercher was killed after she rejected attempts by Knox, Sollecito and another man, Ivory Coast-born Rudy Guede, to involve her in a sex game.

Guede is the only person in jail for the murder, and many aspects of the crime still remain unexplained.

Both Knox and Sollecito have maintained their innocence, and their 2009 convictions led to questions about the effectiveness of Italy's justice system. The trial revealed widespread doubts over the handling of the investigation and key pieces of evidence, and the convictions were overturned on appeal in 2011.

But in March 2013, Italy's Supreme Court overturned the pair's acquittals and ordered a retrial. That proceeding resulted in the convictions being reinstated on Thursday.

"I don't know what to think, because objectively, there's nothing against me and nothing very strong against Amanda," Sollecito said.