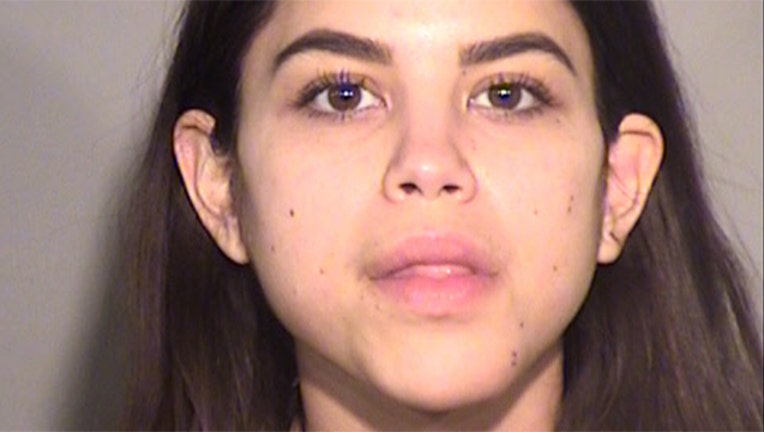 Miya Ponsetto, 22, of Piru, California was arrested near her home in connection with the assault of boy at a New York City hotel. (Ventura County Sheriff's Office)

NEW YORK - Miya Ponsetto, the so-called SoHo Karen, pleaded guilty on Monday in connection with falsely accusing a Black teenager of stealing her phone at a New York City hotel back in 2020.

Under a deal with the Manhattan district attorney, Ponsetto pleaded guilty to one felony — second-degree unlawful Imprisonment as a hate crime — and one misdemeanor — second-degree aggravated harassment — and will serve two years of probation in her home state of California. Ponsetto is already serving probation there for an unrelated case.

If she completes the terms of the probation, she will be allowed to withdraw her felony plea and then plead to a misdemeanor with time served, officials said. If she violates the terms of her probation or the plea deal, she could face up to four years in prison.

"Ms. Ponsetto displayed outrageous behavior. As a Black man, I have personally experienced racial profiling countless times in my life and I sympathize with the young man victimized in this incident," District Attorney Alvin Bragg said in a statement. "This plea ensures appropriate accountability for Ms. Ponsetto by addressing underlying causes for her behavior and ensuring this conduct does not reoccur."

Ponsetto was in the lobby of the Arlo Hotel in SoHo in December 2020 when she got into a confrontation with Keyon Harrold Jr., 14, and accused him of stealing her phone. Video recorded and posted online by Harrold's father shows a very agitated Ponsetto demanding the teen give her his phone.

The NYPD later released a security camera video showing Ponsetto frantically grabbing at Harrold as he tried to get away from her through the front door.

But her phone was found soon afterward in an Uber.

Police initially arrested Ponsetto in January 2021. Then in June 2021, the NYPD charged her with a hate crime.

Ponsetto is due in court on April 11, which is when she could accept the terms of the DA's plea deal.

With The Associated Press.