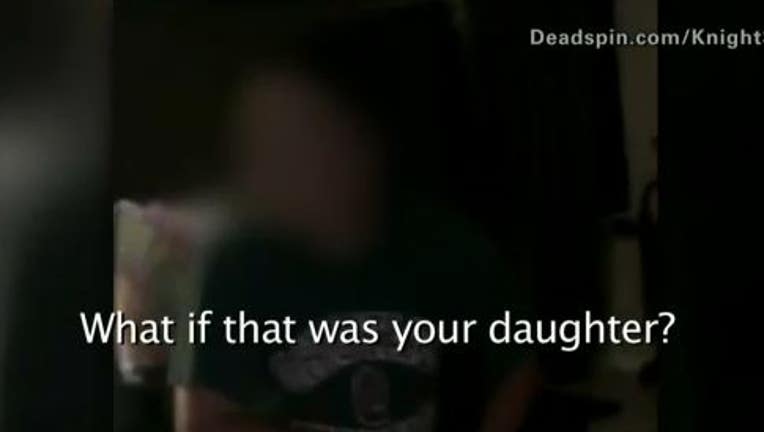 -- The videos, pictures and tweets are chilling. A picture of a girl dangling limply from the arms of two young men.

Other boys, laughingly saying the girl had to be dead because she didn't flinch as her body was violated.

An alleged rape, made into a joke.

The images and social media messages are at the heart of criminal charges against two high school football players accused of sexually assaulting a 16-year-old girl during a series of back-to-school parties in August.

Both boys are charged with rape. One also is accused of "illegal use of a minor in nudity oriented material."

Their trial before a juvenile court judge is scheduled for February 13.

CNN is not identifying the girl or her alleged attackers, who are juveniles. CNN's policy is also not to release the names of alleged rape victims. The case, first reported nationally by the New York Times, has attracted the attention of bloggers and even Anonymous, a loosely organized cooperative of activist hackers.

Anonymous has released information on some figures associated with the town and the football team, and is threatening to release more unless everyone comes clean about what happened that August night.

"The town of Steubenville has been good at keeping this quiet and their star football team protected," an Anonymous member wearing the group's trademark Guy Fawkes mask says in a video posted to the group's LocalLeaks website.

The organization, he says, will not allow "a group of young men who turn to rape as a game or sport get the pass because of athletic ability or small-town luck."

According to Ohio's state attorney general's office, the girl was assaulted the night of Saturday, August 11 and early the next morning.

Involved, according to authorities, were members of the Steubenville High School football team -- demigods in the small, down-on-its-luck town along the banks of the Ohio River. A website dedicated to the team counts down the seconds to their return next fall.

Police got involved on August 14, when the girl's parents came forward to report the alleged assault, according to the Herald-Star newspaper in Steubenville.

"What we want is to be able to show the citizens of Jefferson County that everything that can be done in this case is being done, and if that means eliciting the help of these people from the Attorney General's Office, then that's what we want to do in this case," county prosecutor Jane Hanlin told CNN affiliate WTOV at the time.

By that time, images and messages from that night had made their way around social media.

Crime blogger Alexandria Goddard, a former Steubenville resident, discovered many of the messages, at least some of which are now in the hands of authorities. She first spotted the story in the small town's newspaper and started looking into the situation on a hunch that the highly regarded football team's members were getting special treatment at the expense of the victim.

"When I first came across the article, I just felt like -- because it was involving football players, and there is a culture there that football is very important, that there was probably a little more to this story than what the local media was reporting," she told CNN Thursday. "So I started doing my own research."

One image circulated online and posted on a website maintained by Anonymous showed the girl, dressed in a T-shirt and blue shorts, her body limp, being held hand and foot by two males who appear to be teenagers.

Text messages posted to social networking sites that night seemed to brag about the incident, calling the girl "sloppy," making references to rape and suggesting even that she had been urinated on, according to Goddard.

In one video, posted by Anonymous on Wednesday -- apparently taken the night of the attack -- one teenager makes joke after joke about the girl's condition, saying she must have died because she didn't move during one assault.

Anonymous identified the teen by a name that doesn't match the two who were charged, but CNN cannot independently confirm his identity.

"Is it really rape because you don't know if she wanted to or not," the teenager says on the video. "She might have wanted to. That might have been her final wish."

Other male voices can be heard off-camera, laughing and talking about the alleged assault.

The New York Times reported that a cell phone photo from that night shows the girl naked on the floor, but that investigators were unable to retrieve any usable evidence from other phones seized during the investigation, the Times reported.

The attorney for the girl's family told CNN that the girl is in counseling and is "doing as well as one can expect."

"She's trying to go about her life right now, which is difficult because of all the media attention," said Robert Fitzsimmons. "It's as if she's just flown into this barnstorm. She'll make it through."

Attorneys for the suspects did not immediately return telephone messages left Thursday at their offices.

Steubenville police Chief William McCafferty told WTOV that he could not comment on the case as it was now in the hands of special prosecutors appointed by Ohio Attorney General Mike DeWine.

DeWine told WTOV that the case is being aggressively prosecuted and remains under active investigation.

The parents of one teenager named on Goddard's blog sued her for defamation and sought to have those who anonymously commented on the blog about the case publicly identified. The family has since dropped the lawsuit, according to court documents.

Meanwhile, Anonymous says it is collecting detailed information about the personal affairs of football boosters and others in the town of 18,000 who the group claims may have helped cover up the attack. It's also planning a protest Saturday at Steubenville's city hall "to help those who have been victimized by the football team or other regimes."

The group has already hacked the website of the local football fansite and says it will release the information if people don't come forward to help the investigation -- something Steubenville's police chief told the New York Times had frustrated him when he began investigating the case.

"If you could charge people for not being decent human beings, a lot of people could have been charged that night," the Times quoted McCafferty as saying.