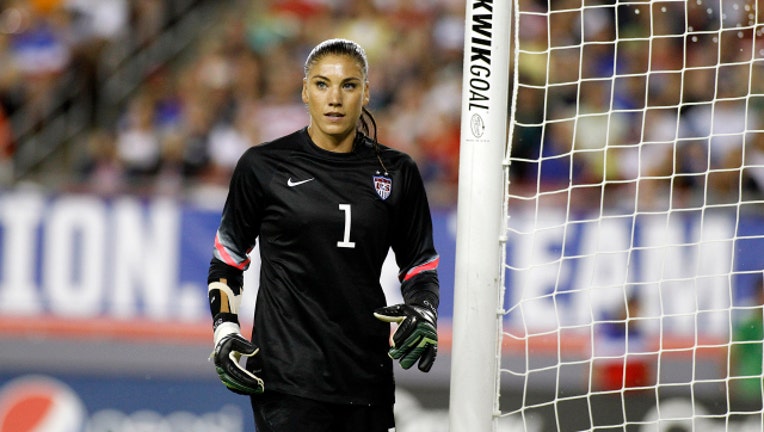 
(CNN) -- Soccer star Hope Solo was arrested on domestic violence charges early Saturday after allegedly assaulting both her sister and nephew at a home in Seattle, Washington, police said.

Solo, 32, goalie for the Seattle Reign FC and a former Olympian, was being held without bail in the south King County jail on domestic-violence assault charges, according to a statement from the Kirkland Police Department. Her name is listed as Hope Amelia Stevens.

She is to appear in court on Monday.

Police said Solo allegedly assaulted her sister and a 17-year-old nephew early Saturday. Officers responded to a 911 call for a disturbance in which a male reported that a woman would not stop "hitting people" or leave the house, the statement said.

At the home, officers heard a disturbance. Inside, Solo appeared "intoxicated and upset," police said.

Police said Solo's nephew and sister had visible injuries. After interviewing witnesses, police determined that Solo was the "primary aggressor and had instigated the assault," the statement said.

It was unclear who is representing Solo.

Solo, who is married to former NFL player Jerramy Stevens, played on two gold-medal-winning Olympic women's teams and appeared on TV's "Dancing with the Stars."

A world-class goal keeper, she is no stranger to controversy.

In a 2012 interview on CNN, Solo spoke about her public image.

The U.S. Anti-Doping Agency in 2012 publicly warned Solo after she tested positive for a banned diuretic -- a substance she claimed she didn't know was in premenstrual medication prescribed by her physician. The agency accepted Solo's explanation and she competed in the 2012 Olympics.

"I don't expect any of the media to be positive," Solo told CNN in 2012. "But I know that I'm doing wonderful things for the sport of soccer and I know I'm doing amazing things for female athletes. So I can take it."

Solo was eliminated from "Dancing with the Stars" in 2011 following a run on the show marred by frequent disputes with pro partner Maksim Chmerkovskiy and the judging panel. Later that year, she appeared nude on one of four covers of ESPN's "The Body Issue."

A native of Richland, Washington, Solo in 2005 became starting goalkeeper for the U.S. Olympic Team. She started seven matches and earned seven shutouts that year, according to her Facebook page.