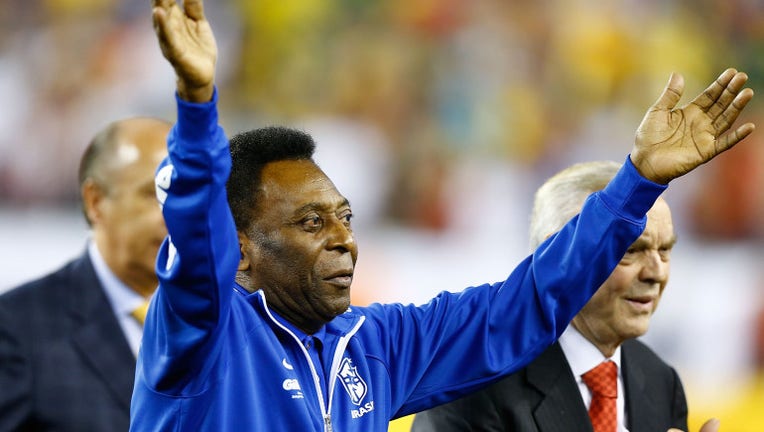 Former Brazillian soccer player, Pele, waves to the crowd prior to the international friendly match between Brazil and Portugal at Gillette Stadium.

SAO PAOULO -- Soccer legend Pele remained in an intensive care unit Monday, a week after he was hospitalized with a urinary tract infection.

The 74-year-old has no fever and is receiving antibiotics intravenously, according to doctors at the Albert Einstein Hospital in Sao Paulo, Brazil.

They are planning tests on Tuesday to analyze the need for possible renal support.

Pele, who was born Edson Arantes do Nascimento, was admitted to the hospital November 24. He had recently undergone surgery at the same facility to remove kidney stones.

The athletic icon had one kidney removed during his days as a player, said his aide, Jose Fornos Rodrigues.

Known as "The Black Pearl" and "The King," Pele is one of the best known names in all of sports.

He burst onto the scene as a teenager, helping lead his native Brazil to the 1958 World Cup championship.

Pele went on to star on two other World Cup title teams, in 1962 and 1970. He also had a breakthrough career with the Brazilian club Santos and later with the New York Cosmos of the now-defunct North American Soccer League.

In 2000, Pele and Argentina's Diego Maradona were named co-Players of the Century by FIFA, the international soccer governing body.

Since retiring from soccer, Pele has remained in the public eye as a product pitchman, ambassador for the sport of soccer and advocate for Brazil's poor, having grown up as one of them in the inland city of Tres Coracoes.