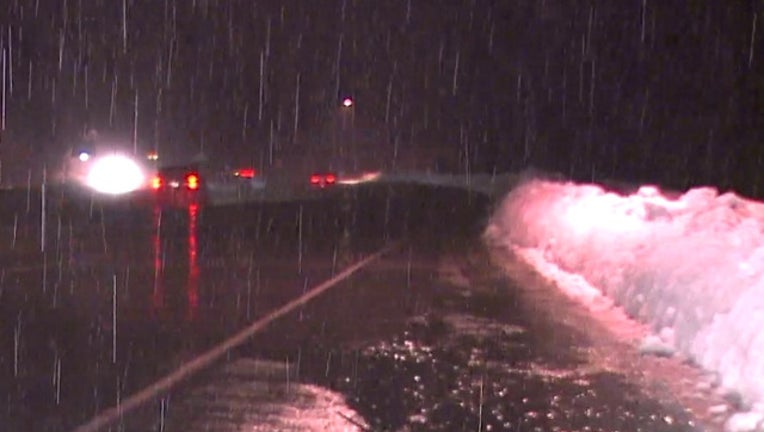 SNOQUALMIE PASS -- Interstate 90 is back open tonight, after a 70 mile stretch was closed down for much of the day because of avalanche concerns.

But winter weather advisory remains in effect, so there is the possibility the road will have to be closed again.

Paul Cooper's been on the road the last two weeks. This morning, he finally started the drive home to Spokane. But just past North Bend, he hit this roadblock and was stopped in his tracks.

Lots of drivers felt that frustration today. WSDOT shut down the interstate last night, and kept it closed most of the day.

“It's been 24 hours,” says Corinne Lathrop, “We're just trying to get back to Pullman.”

WSDOT officials say they were dealing with a number of problems on the road. Snow and rain caused trees to topple onto the freeway last night. So this morning, a contractor started taking down others to prevent future problems.

“We dropped about 50 trees,” says Don Whitehouse. “We've got those down, and have moved them to the side.”

There was also an avalanche overnight that sent 8 to 10 feet of snow onto the road. So WSDOT did more avalanche control during the day, to make sure the pass would be safe.

They knew every hour they kept the road closed was impacting drivers and businesses.

“When you got 8000 trucks that go on this pass each day, and you figure out the value of the freight, it is tremendous,” says Whitehouse.

At 4:30 pm, after about 16 hours, they allowed traffic to start moving again.

Truckers can only drive a certain number of hours each day, so Cooper was hoping the unexpected closure wouldn't stop him from getting home today. But he says delays like this can happen this time of year.

“At least it's not as bad as what they've gotten on the East Coast,” adds Hand. “I'll take this over an ice storm any day.”