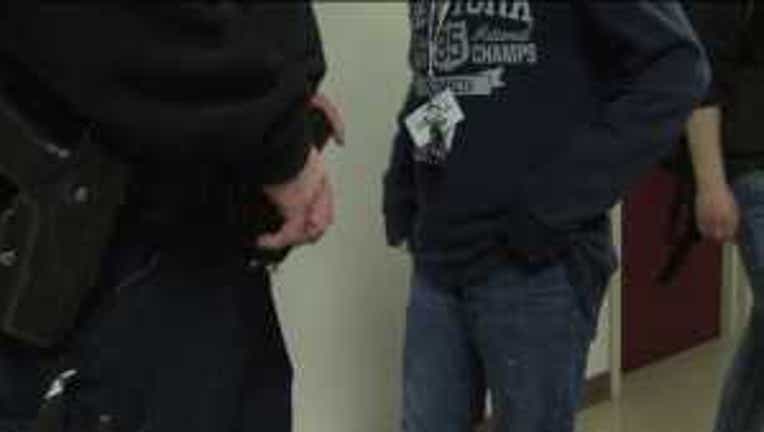 SNOHOMISH COUNTY -- Students in parts of Snohomish County could soon see a few more guns and badges roaming the halls.

Many, both in law enforcement and education, think putting more sheriff's deputies in schools could stem horrific gun violence incidents such as the recent Newtown, Conn., massacre.

Everett Police Officer Mark Carter is currently a resource officer assigned to Explorer Middle School in Everett. He’s the first line of defense in an emergency, but he’s also one of the most popular adults at the school; someone kids can talk to about bullying or other issues, he said.

“You try to build relationships with the kids,” said Carter. “By building relationships you get trust, and the kids can trust you and come to you with their problems.”

But schools in unincorporated Snohomish County don't have officers like Carter to lean on. Parent Cathrina Prettyman has a student at Gateway Middle School. She said the school doesn't have an officer on the campus, and it’s always been a worry.

“There’s no protection for them,” said Prettyman. “They know that when they come into school, nobody’s armed, nobody can protect them.”

That’s why Lovick wants to create a new school security unit. The sheriff said that the tragedy of the school shooting at Sandy Hook had a big impact on him. Everett School Board President Jeff Russell said school security has become a top priority for his board, as well.

“We’re making sure we do everything we can to provide for the safety and security of our kids,” said Russell.  “I mean, there’s no priority that is higher than that one.”

The Everett School Board is the first board presented with the sheriff’s new plan. Because of tight budgets, a lot of districts have been forced to cut school resource officers. This plan would reverse that trend, but it would also cost about a $1 million a year.

The sheriff is apparently considering looking for donations from big business in the northwest, including Costco and Microsoft.

“I think it speaks to the passion the sheriff has about this issue and he’s determined somehow, someway, we make a significant step towards the security of our students.”