Video captured by a FOX 5 viewer's dashcam shows the moment a small plane clipped a power line and crashed on Cobb Parkway.

The crazy landing was caught on dash camera video and sent to FOX 5 by a viewer.

Natasha Williams spoke to FOX 5 and said she was driving home when she saw the plane go down.

"It was crazy," said Williams.

The video shows the plane, a single-engine Grumman American AA-1, clipping a powerline which caused the pilot to lose control of the aircraft. The plane then can be seen crashing into the median nose down on Cobb Parkway.

"I was like he's coming in real low," said Williams, "I've lived here my entire life. I know the routes plane take to get into that airport."

Kennesaw Police said the pilot only managed to make it a half mile out of Cobb County International Airport before he experienced a major problem.

"From the sounds of it, it was an engine failure. The pilot tried to make an emergency landing and ended up crashing on Cobb Parkway," said David Buchanan, the public information officer for Kennesaw Police.

Kennesaw Police and Cobb County Fire responded the scene shortly after 10:15 Thursday morning. Authorities blocked all four lanes of Cobb Parkway as they investigated and notified the FAA. Power crews also responded to repair the damaged powerlines that were hit by the plane. 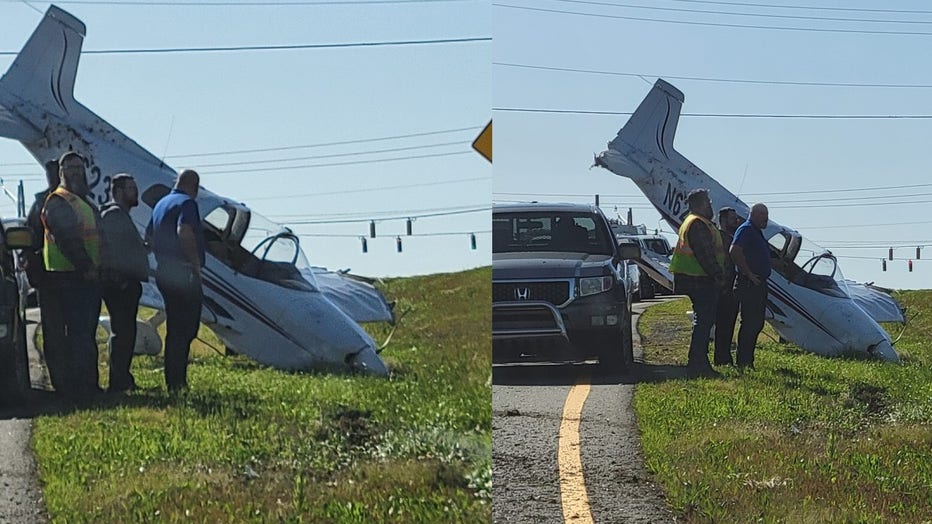 "It was pretty much just a moment of shock," said Williams, "I quickly changed lanes to make sure I wouldn't be in any harm."

Williams said she can't believe her car's dash camera managed to capture the incident. She also said it's even more incredible no one was seriously injured.

Police said the pilot managed to get himself out of the aircraft and drove himself to the hospital. Officials said he is expected to be ok. The FAA is now investigating.