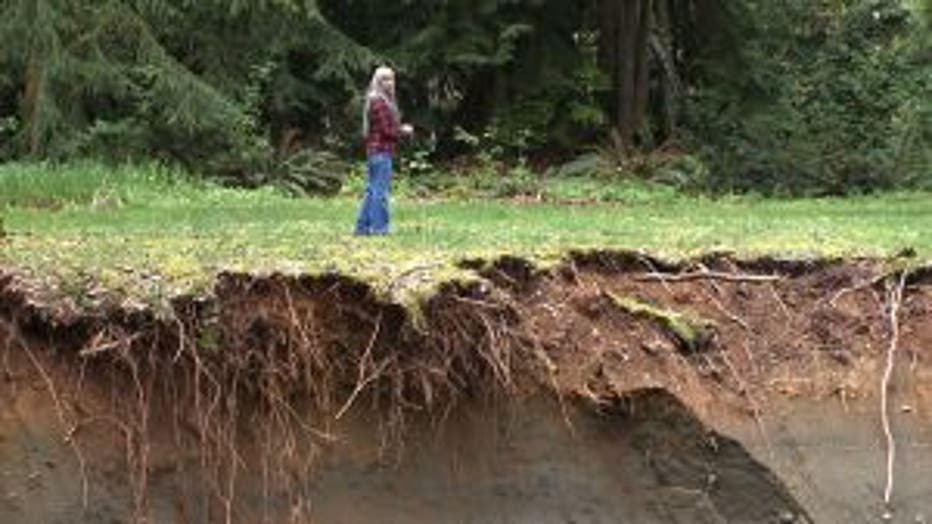 Online records show that the county knew all along that the property was at risk for such a disaster but the homeowners said they were never told.

The Eanes family says that the county will condemn their home if the slide comes within 50 feet of their house, and so far it’s only 60 feet away.

The slow-moving landslide behind Juanita Eanes’ home shows no sign of stopping.

“You can also feel it in the house, there’s a slight vibration,” said Juanita. “It’s just incredible.”

“They gave me a lesson on the lay of the land and what’s going on,” Juanita said. “It’s somewhat difficult to absorb it all because I’m worried about my property, not about history.”

Just like in Oso, the county had marked Jaunita’s property as being at risk for a landslide. But her family says they were never told – and Juanita has never before seen county maps that show her property sits in a landslide risk zone.

Juanita says if she’d had known about the risk, her family wouldn’t have bought the property 11 years ago.

“I know that they want me to understand why this is happening, I understand that,” said Juanita. “But that’s not fixing the problem.”

The problem is likely all of the water flowing from beneath the ground and from the river itself.

County officials said they hope to share more detailed information about their survey with Q13 FOX News and the Eanes family as early as Thursday.