Slade Gorton died on Wednesday at age 92 at the Eastside home of his daughter. Q13's Brandi Kruse shows us how Gorton's legacy is one that our country could learn from.

SEATTLE - Slade Gorton, a patrician and cerebral politician from Washington state who served as a U.S. Senate Republican leader before he was ousted by the growing Seattle-area liberal electorate in 2000, has died. He was 92.

Gorton was the Chicago-born scion of the New England frozen fish family. His four-decade-plus political career began in 1958 when he won a legislative seat soon after arriving in Seattle as a freshly minted lawyer.

He went on to serve as state attorney general, a three-term U.S. senator and member of the 9/11 Commission — the last of which he considered the singular achievement of his life in public service. 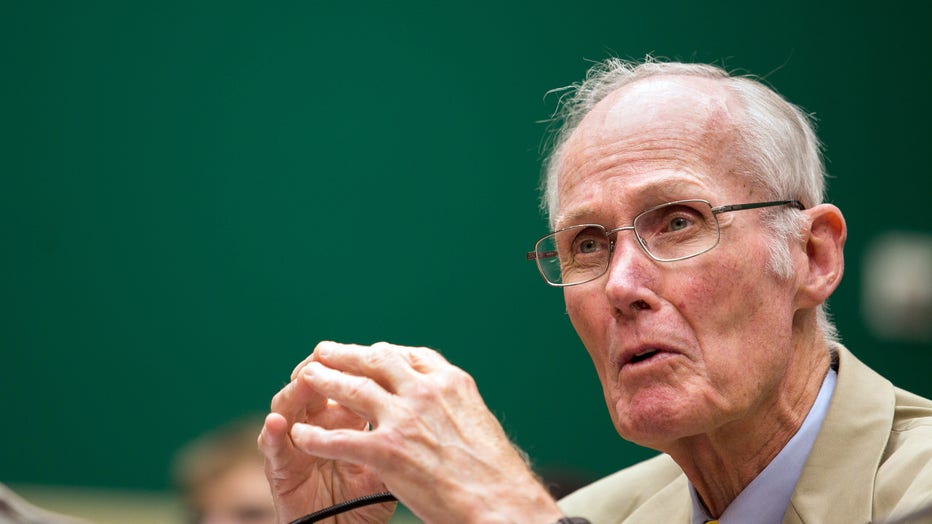 WASHINGTON, DC - JULY 9: Former U.S. Sen. Slade Gorton (R-WA), member of Commission on the Theft of American Intellectual Property, testifies during a House Oversight and Investigations Subcommittee hearing on "Cyber Espionage and the Theft of U.S. I

Gorton was known for his aggressive consumer-protection battles as attorney general and for going to federal court to end SeaWorld’s capture of orcas in Puget Sound; for his defeat in 1980 of the state’s legendary Democratic Sen. Warren Magnuson at the height of his power; and for his work on the GOP inner team in the U.S. Senate. He twice saved professional baseball in Seattle, suing Major League Baseball in the 1970s to force it to bring a team to the city and arranging a deal to have Nintendo’s owner and local investors buy the Mariners to keep them in town in 1991.

Democratic Sen. Patty Murray, who overlapped with Gorton in the Senate, said they didn’t always agree, but still worked together to strengthen clean-up efforts at the Hanford Nuclear Reservation in Washington state, toughen pipeline safety standards and expand health care for children.

Murray praised how Gorton “anchored his leadership in honesty and honor,” such as when he bucked his party to support the National Endowment for the Arts, collaborated with Democrats on the conduct of President Bill Clinton’s impeachment trial, and supported the impeachment of President Trump.

“Throughout his career in both Washingtons, Slade defied convenient labels and stood on principle — we need more leaders in our country like Slade,” Murray said in an emailed statement.

Former Republican Gov. Dan Evans called Gorton an intellectual giant and a strategic thinker who helped define the GOP in Washington state during a time when the party could still prevail in major, state-wide contests.

He was an independent thinker who believed in individual freedom and who distrusted concentrated power, former staff members recalled in a written tribute provided Wednesday. They noted his willingness to take on entrenched leaders and institutions: He called on Exxon’s CEO to resign after the Exxon Valdez oil spill and he fought automakers for improved fuel standards.

But he also sided with loggers and rural communities when he believed protections for spotted owls in the Northwest were overbearing, and he frequently butted up against Native American tribes on issues of fishing rights.

“Gorton was our toughest opponent,” Ron Allen, former president of the National Congress of American Indians, said in the tribute. “He made us better, smarter and more savvy. ... He cared about the salmon and the environment and said the tribes should play a role. But when it came to sovereignty issues we collided time and again.”

Gorton, runner-thin to the point of gaunt, struggled with an image of an icy, aloof Ivy Leaguer. He was sometimes compared to the frozen fish sticks his grandfather once sold, and he squired under the nickname “Slippery Slade.” At the 2000 state Republican convention, he acknowledged he wasn’t warm and fuzzy, a tough move for a politician in an era that valued personality and charm.

“I’m more comfortable reading a book than working a room ... and my idea of fun is going to a Mariners game with my grandkids, keeping score and staying to myself,” he said.

Gorton chalked it up to Yankee reserve, not disdain for people.

Thomas Slade Gorton III was born and grew up in the Chicago area, graduated from Dartmouth, got a law degree from Columbia, and served in the Army and Air Force. He settled in Seattle so he could enjoy sailing and skiing nearby — and break into law and Republican politics.

He quickly landed a top law job and married former Seattle Times reporter Sally Clark. The couple, who had three children as well as grandchildren, remained married until Sally’s death in 2013.

“Right from the beginning, it was clear he had brains to spare,” recalled Evans, two years his senior.

The young Republicans later took over the state House with help from a few Democrats. Gorton became majority leader.

Evans was elected governor in 1964, and Gorton began his own climb in 1968. First came three terms as attorney general, during which he broke with fellow Republicans in publicly calling for President Nixon’s resignation. In 1980, aided by President Ronald Reagan’s landslide, he won a coveted U.S. Senate seat by knocking off the legendary Warren G. Magnuson, appropriations committee chairman and Senate president.

Gorton was a youthful 52. Magnuson was mentally and politically agile but shuffled, mumbled and looked older than his 75 years — a difference Gorton played up.

Within three years, Gorton was writing the federal budget, working on Social Security and budget reforms, and winning a reputation as one the best of the new crop.

But a funny thing happened on his way to fame and glory: He lost the next election. Brock Adams, former congressman and Jimmy Carter’s transportation secretary, edged him by 26,000 votes.

Gorton retreated home, assuming he was done in politics. But then Evans decided to vacate Washington’s other Senate seat, and Gorton launched his comeback. He narrowly defeated Democratic Rep. Mike Lowry in 1988 after his staffers persuaded him to try to be more personable on the campaign trail.

Gorton easily won a third term in 1994. He rose in Senate seniority and was appointed to the leadership circle by then-Majority Leader Trent Lott.

By 2000, Gorton was 72 and looking over his shoulder at a challenger 30 years his junior: Democratic dot-com millionaire Maria Cantwell, who was born the same year Gorton was first elected to office. She borrowed a page from his playbook, insisting the race wasn’t about age but about “a 19th-century view of where we need to be.”

Gorton did not retire, but continued serving in roles on numerous civic boards and campaigns — most notably the 9/11 Commission.