More than 700 people were still without power in the areas of Skykomish and Baring on Wednesday. Some of those residents have been without reliable power since before Christmas Eve.

SKYKOMISH, Wash. - More than 700 people were still without power in the areas of Skykomish and Baring Wednesday afternoon. Some of those residents have been without reliable power since before Christmas Eve.

The Skykomish Harvest Food Bank has been running on a generator and volunteers have been serving hot meals to those without power since Monday. 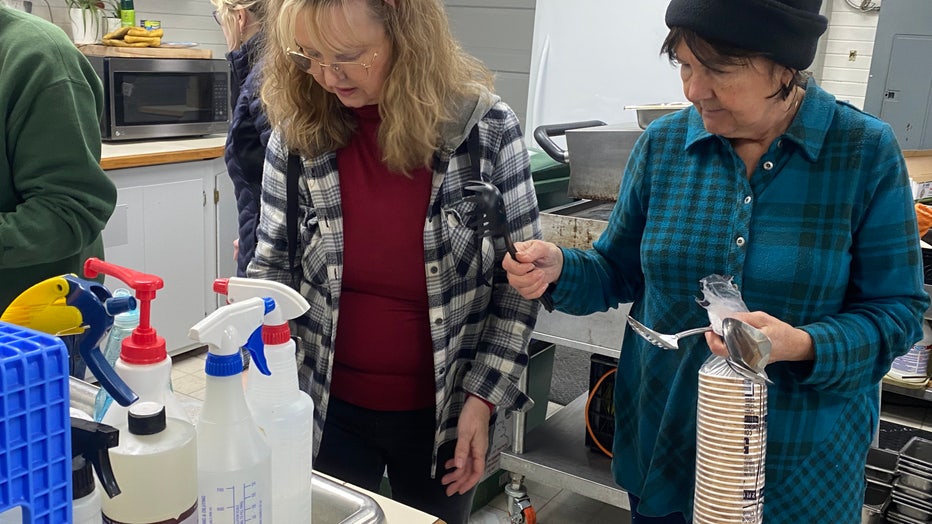 "Early Friday morning, the power went out, so we had no power for Christmas Eve, Christmas Day," said Karen Stubrud, Treasurer of the Skykomish Harvest Food Bank.

Stubrud says the whole town is under the massive outage. There was a bit of hope Tuesday night, but she says it was short-lived.

Although the folks there are used to occasional outages, the length is unusual.

"Some people literally do not have a fireplace, or if they have propane, they start getting low on propane," said Stubrud. "It gets cold, and they just kind of bundle up, that’s why we want to open this up – have a warm place, a hot meal."

The Alexander's have a generator at home, but had a long drive to Leavenworth this week to get fuel, due to outages and road closures. They were grateful for the hot meal Wednesday.

"When we have our yearly power outages or there are floods, or whenever else the community comes together, and provides hot food which is great," said David Alexander.

"We are hoping that with the wind subsiding today and the calmer weather, we will be able to make significant progress in all of our restoration efforts," said Gerald Tracy, PSE Spokesperson.

We caught up with a PSE crew that was busy working off of May Creek Road Wednesday, replacing high-line poles. It's in an area that Tracy says has sustained a lot of wind damage.

"Since last Thursday our crews have been working day and night, every day, because we’ve had snow from snow to ice and wind last night," said Tracy.

Meantime, Karen Stubrud says the Skykomish Harvest Food Bank is always looking for more volunteers to help with the cooking and to staff the food bank. Donations are also accepted for the food bank online.

Stubrud estimates the food bank is helping around 20-25 families per day.

"They come in, and they like to visit too, and they can take stuff that they need from the food bank to take it home," she said.